The Senate Tuesday confirmed the appointment of Maj. Gen Faruk Yahaya as Chief of Army Staff (COAS),  following  the adoption of the report of the Senate joint Committee on Defence and Army at plenary. 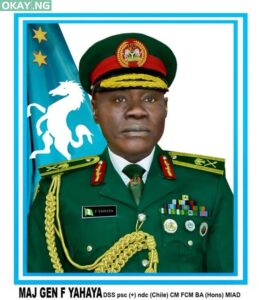 Presenting the report, Chairman of the Committee, Sen. Aliyu Wamakko (APC-Sokoto) said the committee found the nominee suitable to occupy the position.

Wamakko said the decision was reached given Yahaya’s wide display of indepth knowledge and experience on strategic tactics of military operations.

According to him, the committee was satisfied with robust nature of the engagement and interactions from the nominee.

He said the committee also found out that his nomination was in line with the constitution.

Wamakko said the committee did not receive any petition against the nominee.

He said the nominee had been cleared by the Department of State Security Service (DSS) and presented his code of conduct acknowledgement slip.

The nominee, Wamakko said, possessed the required academic qualifications to occupy the position of Chief of Army Staff.

He, therefore, urged the Senate to confirm his appointment.

Contributing, Sen.Alli Ndume,(APC -Borno) a member of the Committee and Chairman, Committee on Army, urged the Senate to confirm the nominee to enable him to execute some responsibilities which he could not discharge in acting capacity.

Sen. Gabriel Suswam (PDP-Benue) said the nominee, if confirmed would be able to tackle issues of terrorism and insurgency, given his last posting.

He said that the nominee was knowledgeable on how to tackle issues of insurgency.

The President of Senate, Dr Ahmad Lawan, said the presence of all the committee members at the screening of the nominee showed how committed, serious and patriotic the senate is on the security of the nation.

He, however, pointed out that the military alone could not resolve the security challenges, saying that it required the effort and support of all Nigerians.

Yahaya was appointed on May 27 by President Muhammadu Buhari after the death of former COAS, Ibrahim Attahiru in a plane crash in Kaduna State.