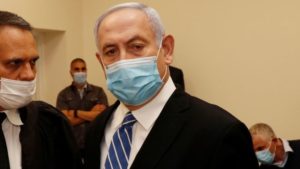 The trial of Israeli Prime Minister Benjamin Netanyahu on corruption charges has opened in Jerusalem, days after he began a new term in office, making him the first sitting leader to undergo trial in Israel.

Mr Netanyahu, 70, is the first standing leader to face trial in the country’s history. He denies accusations of bribery, fraud and breach of trust.

Arrived at the courthouse for a brief hearing, he said the cases were aimed at “toppling him in any way possible”.

He was sworn back into office as head of a rare unity government a week ago.

He has rejected calls by opponents to step down while he fights the cases.

The leader of the right-wing Likud party is Israel’s longest-serving prime minister, having been in power continuously since 2009. He also served a term in office from 1996-1999.

What happened at the court?

As he arrived at the Jerusalem District Court on Sunday, he told reporters: “I’m here with a straight back and my head held high.”

“When you need to take me down, a strong prime minister from the right, everything is possible,” he added.

At the start of the hearing, which lasted about an hour, Mr Netanyahu told the judges: “I read and I understand the indictment.”

He stood in a face mask and refused to sit down on the defendants’ bench until the reporters left the room, local media say.

His lawyers say they need several months to prepare their defence. The date for the next hearing has been set for 19 July.

What is Benjamin Netanyahu accused of?

Case 1,000 – Fraud and breach of trust: he is accused of receiving gifts – mainly cigars and bottles of champagne – from powerful businessmen in exchange for favours

Case 2,000 – Fraud and breach of trust: Mr Netanyahu is accused of offering to help improve the circulation of Israeli newspaper Yediot Ahronot in exchange for positive coverage

Case 4,000 – Bribery, fraud and breach of trust: as PM and minister of communications at the time of the alleged offence, Mr Netanyahu is accused of promoting regulatory decisions favourable to the controlling shareholder in the Bezeq telecom giant, Shaul Elovitch, in exchange for positive coverage by Mr Elovitch’s Walla news site.

Mr Netanyahu has strongly denied all the charges against him, branding them a “witch-hunt” by political opponents, and has vowed to clear his name.

How can the prime minister serve and stand trial at the same time?

According to Israeli law, a leader charged with a crime is not required to resign. But there is no precedent.

A former prime minister, Ehud Olmert, stepped down as party leader when he was under investigation for corruption in 2008 but technically remained prime minister until elections the following year – polls which brought Benjamin Netanyahu to power.