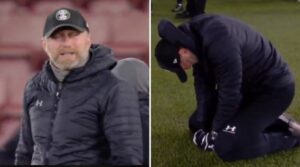 The Austrian fell to his knees and cried as referee Andre Marriner blew the final whistle on the South Coast.

Danny Ings’ goal after just two minutes was enough to give the Saints all three points against the champions and move them sixth in the Premier League. Ings was a former Liverpool player who got limited playing time at Anfield before he was offloaded.

The shock victory earned Hasenhuttl’s first points against Liverpool as a manager and the enormity of the win quickly got the better of him.

The touching scene occurred after the Saints defended resolutely for 88 minutes and limited Jurgen Klopp’s side to few opportunities.

After the game, Hasenhuttl – who has been dubbed the ‘Alpine Klopp’ – was still visibly emotional and said: “I started believing we could do it in the 92nd minute.

“But the way we defended today was amazing. The effort the guys put in was the key to winning.

“The mentality was absolutely perfect. The perfect day for us, the perfect evening for all Southampton fans out there.

“An important step forward I think. We had so many injuries since yesterday and we still competed against such a team.

“We had to have a perfect game plan today and luck. Against such a team you have to have luck and we had that today.”

Asked if it the result was a good start to 2021, Hasenhuttl added: “The perfect one. Nobody expected us to take points against them tonight.”

The ex-Liverpool striker said: “He is very passionate. And it’s great for all of us to see that as he brings his passion into his game.

“The manager has got us all working our socks off and it’s really paying off this season.”

With reports from UK Sun