Commentaries
Home›Commentaries›SOUTHERN KADUNA CRISIS: A SALUTE TO COMMITMENT OF ATYAPS(KATAFS),HAUSA/FULANIS

SOUTHERN KADUNA CRISIS: A SALUTE TO COMMITMENT OF ATYAPS(KATAFS),HAUSA/FULANIS 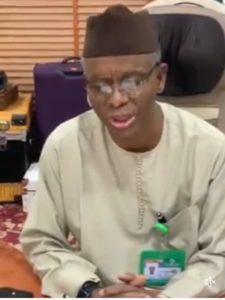 The peace deal between the hitherto warring communities of Atyab Chiefdom,is a welcome development, an unexpected early Christmas gift for every Nigerian,and   a reminder of  the historic peace deal between the State of Israel and Egypt, which apart from ending the over 30 years of hostility and costly war, also paved the way for the eventual restoration of peace between Israel and Jordan,as this is expected to usher in peace in the region. What makes the development in Atyap Chiefdom a huge delight, is that it was voluntarily initiated and sponsored by the Atyap Traditional Council and wholeheartedly embraced  by the hitherto warring communities in the Chiefdom.

The peace deal was a huge surprise, and has for obvious reasons elicited unparalleled excitement, that would  continue to reverberate across the whole world considering that merchants of war have successfully branded Southern Kaduna as a far more dangerous place than Afghanistan, a place where the various communities at the slightest provocation engaged each other in a war of attrition, that questions not only their common humanity, but diminishes them all, in spite of the support of those who conveniently use the crisis to advance their own strategic political objectives. So while the likes of Chidi Odinkalu and Femi Fani-Kayode profit immensely from the crisis, the people of Southern Kaduna are left with the rough end of the stick- withdrawal of investors and notoriety.

The Atyaps, the Hausas and Fulanis by willingly brokering the August 22,2020 peace deal themselves, what they have appropriately tagged “home grown” solution to the problem of the Chiefdom, have not only showed the road map to peace, but have eloquently confirmed the unequivocal position of the Nasir El- Rufai administration that the ultimate guarantee of peace is the willingness of communities to live in peace and harmony, and resolve to settle all differences by strictly lawful means, without resort to violence. The peace deal is also a strong repudiation of the settler/indigene dichotomy, a fundamental issue in the Southern Kaduna crisis, which also  resonates with the Citizenship policy of the El-Rufai administration.

The alarming cynicism, the obvious wish that the peace deal should not work by a minute section of the media, which hasn’t masked its disgust, their wait and see attitude, their diabolical wish that the warring communities remain perpetually at war is perplexing and clearly confirms that merchants of war and other parasites  found the Southern Kaduna crisis convenient for settling scores with Nasir El-Rufai, their nemesis, who as the Director-General Bureau for Public Enterprises, privatized many government companies, and has remained the enemy of those that lost out, due to technical reasons, lack of financial capacity and management capacity, continue to hold him responsible for their loss. Had El- Rufai succumbed to the  pressure of “asset strippers”,  that definitely would have derailed the objectives of the privatization programmme , but El- Rufai most  certainly would have saved himself from the heavy baggage he is carrying today, because he choose to serve with distinction at the BPE and as minister of the Federal Capital Territory.

SOKAPU, it must be stated can never midwife peace in Southern Kaduna, because it’s opposed to what the Atyap people have conceded; the right of every Nigerian to reside anyway and pursue their legitimate business, that they have killed other tribes, just as the other tribes have killed them and because SOKAPU lacks the  legitimacy and confidence of  the other parties in the crisis. The reaction of SOKAPU to the development in Atyap Chiefdom  was a  monotonous diatribe of Southern Kaduna belonging to only indigenous people, and referring to others as settlers.

The roadmap by the Atyap Chiefdom, that takes ownership and responsibility for peaceful coexistence is definitely the way to go, as opposed to the irredentist and “usurpry”  position of the Southern Kaduna Peoples Union (SOKAPU) that has no control over any Emirate or Chiefdom, but insists that any peace deal must be midwifed by it.

Key requirements for sustainable peace, like the Atyaps and the other communities have clearly shown, includes the fact that it must be built from within, a bottom-up approach, because it enables the people take responsibility for peace and harmony, exactly what the state government has consistently advocated. They have confirmed the position of Governor El-Rufai “that beyond boots on the ground, military bases and police stations, the ultimate guarantee of peace is the willingness of communities to live in harmony and their resolve to settle differences through lawful means”.

For obvious reasons the various communities in Atyap Chiefdom won’t be  popular and would be hated by their kit and kins, for owning up to several truths; that they have all been involved in killing, maiming, burning of houses, blocking of highways etc, a narrative that SOKAPU has stridently been denying, and which most unfortunately has been bought hook, line and sinker  by  Southerners who ironically refuse to acknowledge the massive banditry attacks in the Northern part of the state, probably because the victims are Muslims or  lesser human beings. This without doubt will remain a blunt on the humanity of those that have continued to close their eyes to the human tragedy in one part, while falsely describing another as genocide.

Slowly, but surly El-Rufai will be vindicated – there will be a triumph of truth, over the false narrative. There will be an acknowledgement that he gave the age long crisis his all. That he facilitated the establishment of military and police bases in the south. That all he sought to achieve was to replace violent strife with harmony and to give vent to the constitutional provisions that he swore to enforce.

It is inconceivable that the Atyap peace deal won’t be subjected to some stress, but the saving grace  is the resolve and commitment to a new Atyap Chiefdom,  that is welcoming, that does not discriminate between native born and others who decided to make the Chiefdom their home. And most importantly the commitment, that  never again will two fighting for whatever reason lead to communal strife that usually engulfs the entire Chiefdom.

NOSDRA apologises for error, says 45 not ...