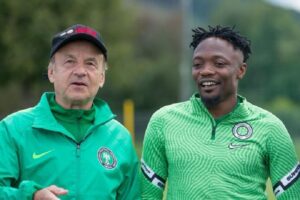 Some urged the NFF to appoint a world class coach for the Super Eagles ahead of the Cup of Nations and the World Cup next year.

But the victory which came via two penalties did not sit well with some Nigerians who described the Super Eagles German handler as far beneath the standard of the Super Eagles.

They accused Rohr of showing obvious preference for tired legs like Odion Ighalo and Ahmed Musa, both of whom have seen their form dip in recent years forcing them to play in lowly ranked leagues in the world.

Nigeria has been struggling to qualify despite being placed in a supposedly weak group with Liberia, Cape Verde and Central African Republic. Nigeria will now have to win or draw the last group game against Cape Verde in Lagos on Tuesday to qualify.

‘We have good players who are in top form and play currently for their clubs in Europe. We watch these players but our coach Gernot Rohr is our problem. He prefers older players who are no longer in form. Why is afraid of using younger, more vibrant players. Nigeria would have qualified ahead of the last match given that Mother luck placed us among weak teams,” yelled Segun Ayomife at a viewing centre in Surulere, Lagos.

Shortly after the match on Saturday, some radio analysts and callers put the blame squarely on Rohr’ saying his coaching standard cannot match the exposure and talent of the Super Eagles players.

Victor Osimhen took his tally in the qualifying series to three goals when he slammed home from six yards in the 14th minute, after Kelechi Iheanacho, his striking partner was scythed in the box as he proceeded to beat goalkeeper Wynney de Souza from a long pass.

The Lone Star showed some sparkle and got behind the Eagles rear guard on two occasions only to be denied by an alert Maduka Okoye.

Workhorse Moses Simon toiled the length of the field to keep the right side of the Super Eagles going.

In the 28th minute, the Super Eagles thought they had scored a second when defender Jamilu Collins striking the ball past de Souza, only to be ruled off-side by Tunisian referee Youssef Essrayri.

Osimhen, energetic and vibrant, should have made it two for Nigeria minutes later, but shot into the sky with only de Souza to beat.

In the second half, both teams had chances to score but it was Nigeria that added to their tally in added time, when Osimhen got behind de Souza following a through pass by Iheanacho, only to be upended by Souza.

It offered captain Ahmed Musa, an opportunity to score on a day he became Nigeria’s senior caps’ record holder by playing his 102nd game.

Meanwhile, in a simultaneous group encounter on the Island of Mindelo, Cape Verde’s Blue Sharks came back from a goal down at half time to overcome the Wild Beasts of Central African Republic 2-1.

The result saw the Eagles maintain their two-point cushion at the top of the pool and need only a draw on home soil, on Tuesday, to reach the potentially explosive final round scheduled for March 2022.

Buhari mourns General, 3 Others Killed by ...