Residents and some students of Government Girls’ Junior Secondary School in Jangebe, Zamfara, north-west Nigeria have continued to recount how scores of terrorists on motor bikes invaded the school and whisked away over 300 students. 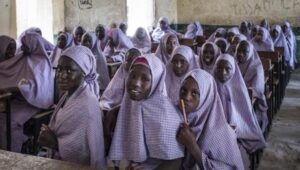 Some residents who spoke with journalists said that the terrorists came in their hundreds riding on motorcycles and shooting in the air before entering the school around 2 am on Friday.

“We were hearing gun shots in a manner that suggests this was not local vigilante or hunters. The guns were obviously sophisticated guns and they were shooting indiscriminately. I had no idea that it was the girls’ school that was under attack. I was afraid to come out,” said a resident in muffled tone.

A staff of the school, who spoke with News Agency of Nigeria on condition of anonymity, said that 60 of the girls were safe as some of them hid from the attackers during the invasion

Meanwhile, the Commissioner of Police in Zamfara, Abutu Yaro, has confirmed that 317 female students of the Government Girls Science Secondary School, Jangebe were abducted on Friday. It is the third abduction of students from their hostels in the north in recent weeks.

Yaro spoke with journalists on Friday in Jangebe, Talata-Mafara Local Government Area of the state.

He expressed dismay with members of the affected community who resorted to taking laws into their hands by attacking vehicles, including those on rescue mission and those belonging to journalists and appealed for calm. A journalist was injured in the attack by residents.

“People must understand that the government and security agents are on their side and against the bandits that is why it is very important for them to see the need to allow security agents do their work effectively and rescue the victims.

“We are doing our best along with all sister security agencies, members of the vigilantè group and the state government to get to the bottom of this matter.

“l can assure you that we will rescue all the students unhurt,” he said.