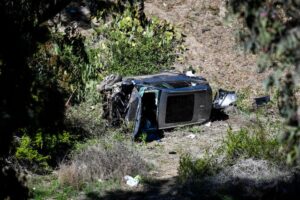 The Los Angeles County Sheriff’s Department said in a statement that the golfing great had to be extricated from his vehicle after the rollover crash in Rancho Palos Verdes, California. Woods, 45, was the only person in the car.

Though he was unable to confirm Woods’ identity, Los Angeles County Fire Department spokesman Christopher Thomas classified the crash victim’s injuries to USA TODAY Sports as serious but not life-threatening.

“He is currently in surgery and we thank you for your privacy and support,” Steinberg said in a statement Tuesday afternoon.

Authorities said the crash occurred just after 7 a.m. PST on the border of Rancho Palos Verdes and Rolling Hills Estates, an upscale neighborhood south of downtown Los Angeles. Woods had been in the area for the Genesis Invitational at nearby Riviera Country Club. He hosted the event and presented the trophy but did not play because of a recent back surgery.

Authorities did not immediately specify what caused the crash, but the Los Angeles Times reported that Woods “was traveling at a high rate of speed” on Hawthorne Boulevard and “lost control of the vehicle before crossing the center divider,” citing law enforcement sources.

Area residents told USA TODAY Sports that car accidents are frequent along that stretch of Hawthorne Boulevard. There is a span of roughly 100 yards where sand has been placed for cars and trucks that gain too much speed.

While the sheriff’s department initially said authorities needed to use the “jaws of life” to get Woods out of the vehicle, Thomas said the tool was not needed.

“The jaws of life were out there, but basically what they did was they broke the windshield out,” he explained.

Thomas added that there was a second crash at the same spot later Tuesday morning as another vehicle apparently pulled over to see what happened and was struck by a third vehicle. That crash did not result in any injuries.

Video of the scene televised by CNN on Tuesday afternoon showed Woods’ car severely mangled about 20 feet off the road. The entire front end of the car was destroyed, and several pieces of the vehicle had broken off and were lying to the side.

Another local resident, Claudia Gamio, 69, said she heard the crash and saw Woods’ golf clubs scattered around the car.

The Tuesday crash comes a little more than a decade after Woods was involved in a now-infamous accident outside his former Florida home. At roughly 2:30 a.m. on Nov. 27, 2009, his Cadillac Escalade hit several hedges and a fire hydrant before coming to rest after hitting a tree.

Daniel Saylor, the former chief of police in Windermere, Florida, told The Associated Press at the time that police found Woods outside the vehicle with his wife, Elin, nearby. The crash happened several days after the tabloid the National Enquirer published a story saying Woods was having an affair.

Not long after the accident, and the story, Woods would confess to living a secret life and having multiple affairs.