It might be safe to say nobody saw it coming. Except Tony Onyemaechi (Who knows tomorrow?) Elumelu himself. Or his parents. Running around Ifeyinwa Primary School as a zesty tot and later berthing at St. Pius (III) Grammar School, both in Onicha Ugbo, a rural commune in Aniocha North local government area, Delta State was not enough to conjecture the epiphany of a regular neighbourhood child. Though born in Jos, growing up was largely in Delta. 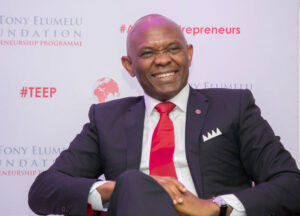 But the grace to hope and the power in hope were all his parents, like most well-meaning parents, held on to. Naming him Onyemaechi was in itself an expression of faith in the power of the Creator to make tomorrow far more glorious than today. It was an indexation of the power embedded in hope. That power has transformed a home-boy to a global citizen. Tony Elumelu, made-in-Nigeria, has moulted to Tony Elumelu, made-for-the world. The boy in the Delta hood is now the man of the world. It’s the power of destiny.

For sure, destiny speaks in multiple dialectics. For some, the dialect of destiny is in their talent, an innate skill to outshine the competition in a particular calling or vocation. For others, it’s in book wisdom, their ability to assimilate easily and illuminate their environment with their wellspring of knowledge.

For yet another category, it’s in their street smartness, an uncommon grace to dare their fear, thread paths untrodden and climb cliffs uncharted. This category combines book wisdom with street wisdom. The end-product is a steely heart, unfazed by the fiendishness of the street, unnerved by the turbulence of time. Gutsy and full of chutzpah, they have an uncanny ability to understand the times and seasons. They know when to invest; where to invest. They also know when to walk away, even when the honey in the pot is still aplenty. Elumelu belongs to this tribe; the club of fortune hunters, of men and women who are not afraid to dare. He would rather dare than duck. He would rather aspire than retire. Like Jeff Bezos, who dared the perils of e-commerce when nobody thought it mattered; like Bill Gates who dropped out of the future-assured comfort of Harvard to embrace the uncertainty, with all the thorns and tares, of a Microsoft start-up.

For this category of persons, life is a journey of no retreat, no surrender. Laziness is not their companion. Slothfulness loses its potency before them. They are bound to success. Irrevocably committed to derring-do. Fortune, they say, favours the brave. All triers and doers share these traits. Elumelu has them in lavish measure. And with that he has made a success of his hustles. And won many hearts. Made many friends. Touched many lives. An exemplum of the Macedonian spirit: always willing to help, not because he has too much of abundance but because he’s wired to be of help to humanity, irrespective of tribe and tongue, race and religion.

On Monday March 22, he marked his 58th birthday. Ordinarily, birthdays are usually celebrated with family and close friends. A moment of reflection; a day of jollification, introspection and exudation of gratitude to the giver of life. But Elumelu has long ceased to be an ordinary child of Delta State parenthood. He’s an African child, son and entrepreneur. He’s a global citizen. Mentor, teacher, inspirer, a child of consolation. A bastion of hope. A bulwark of support. A boulder for many shoulders. Thus, his birthday is no longer his personal fete. It’s the peoples’ moment of felicitation. A special day across Africa. It’s celebrated from Kigali to Kitwe, Lagos to Libreville. Elumelu’s birthday is the special day for African youth entrepreneurs whom he gave hope and turned their faith to substance, a whole generation of youths on the continent whose latent creative energies, raw skills and unrefined entrepreneurial flair he, singlehanded, turned to an oasis of wealth and opportunities. No African entrepreneur has impacted on African youths more than him. The Tony Elumelu Foundation, TEF, is a movement. It has transcended beyond the frontiers and bounds of your everyday non-governmental organisation. It’s a catechism on entrepreneurship, shaping the thoughts and minds of young Africans, male and female, and pointing them to the path of hope, self-belief, hard work and creativity. And many young Africans have sipped from this broth of hope brewed in Nigeria.

Tony Elumelu is today synonymous with wealth, good works and entrepreneurship. He exemplifies all that is good of humanity. A worthy African ambassador to the world. But it’s far beyond that. He reminds us that there’s nothing wrong with us as Nigerians. Here’s a man wholly made-in-Nigeria. From primary school through secondary school to the university (Ambrose Ali University and University of Lagos), Elumelu’s a product of Nigeria’s public school system. He has already mastered his turf as a banker before his academic sojourn at Harvard, albeit briefly.

He’s moulded in Nigeria’s public schools, functioned in Nigeria’s banking sector. Remained resolutely non-partisan; resisted the lure of politics; overcame the inebriating stupor of ethno-religious bigotry. He opened his arm to the rich and poor. He embraced the Muslims and Christians. He did not despise the atheist. His focus is on humanity, not on the inanities of tribal and religious divisiveness. His Africapitalism gospel of rousing African investors to invest on the continent is a business cum management model that has stimulated a new thinking among African investors, and has stirred the global investment and academic community to take a deeper look at Africa.

In Elumelu, we see a true Nigerian, indeed African. He wears no badge of hate, bears no emblem of bigotry. African leaders must look to the likes of Elumelu and re-model their leadership style. Promoting one religion above others does not make you a good leader. Favouring one ethnic group to the hurt of others does not only cast a slur on your leadership credentials, it diminishes our collective humanity. Without public office, Elumelu has built a massive network of youth entrepreneurs and friends across Africa; he has empowered small and medium scale entrepreneurs on the continent far more than some public office holders including governors.

Lest we take it for granted. Elumelu is not under any compunction to give and keep giving. He’s not under any obligation to teach others the basics of making wealth and maximising opportunities. He does so because he’s realised that it’s more blessed to give than to receive. He gives because he’s realised that when you help others to light their torch, it does not diminish the glow of your torch in your environment, rather it helps the entire community to dwell in light instead of being swamped in the blackness of darkness.

For his humaneness and many more, let’s toast to a rare African; a pathfinder for African youths and torch-bearer for many hitherto caught up in the grim cauldron of poverty. Happy birthday to an African legend; a giver of hope, an embodiment of wholesome goodness.