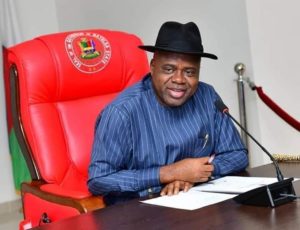 The Bayelsa State Gubernatorial Petition Tribunal on Monday nullified the election of Governor Duoye Diri of Bayelsa State, a PDP candidate at the last election. It ordered fresh election within 90 days.

The election was nullified based on a petition by the Advanced Nigeria Democratic Party, ANDP, which argued that it was unlawfully excluded from participating in the election.

Recall that on Saturday,  the tribunal dismissed three other petitions against the election of Governor Diri of the Peoples Democratic Party. The three petitions were filed by separate parties.

The petitions dismissed by the tribunal were filed by the Alliance for Democracy (AD), the United People’s Congress (UPC) and the Liberation Movement (LM).

Governor Diri was pronounced  governor via the Supreme Court ruling of February 13 which sacked David Lyon of the All Progressives Congress (APC) as the governor-elect barely 24 hours to his inauguration.