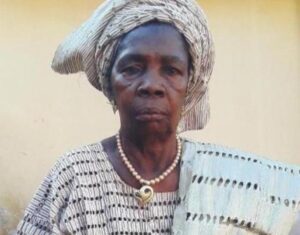 I had to do some fresh searching for the meaning of April Fools Day before writing this. Something to do with an annual custom on 1 April consisting of practical jokes and hoaxes. One search revealed that it has been celebrated for several centuries by different cultures, though its exact origins remain a mystery.

It was on April 1, 2021 anniversary that my Mama Julianah Ademolahan Adeleye departed from this world at the age of 88 to meet her maker. It was at the same age that my father passed on in 2015.

She was a beautiful Princess, the fourth of the six children of Eye Lisa of the Arapayan dynasty from the royal household of Oloofe of Oke-Iju, Akure North, Ondo State, Nigeria. She was the last one standing. It was an end of a generation.

It is impossible for me to accept and believe that my Mama is no more. It took me so long to gather my thoughts together to write this tribute. There is this feeling that when next I visit home, she will still be there.

My mother’s life was an open book on integrity, fairness, courage, humility, enterprise, love and fear of God.

Among her siblings and in the community, she was a bridge builder and a peace maker. My mother hated cheating. Whenever there were burning issues to be settled, she would be the point of last resort. On her own initiative, she would go behind the scene to meet warring sides and beg them to shelf their swords. Like rain, she kept no enemy. She would state things as they ought to be. She would always call a spade a spade, and among her age group association, they knew her for who she was, a woman of integrity.

As a woman of virtue, my mother stood by my father during thick and thin. She helped him in his farm; she regularly planted her own vegetables and what was needed to run the home. She was the stop gap when Papa was slow to provide for our needs. Her energy cannot be quantified. She was a superwoman.

To have eight children and still love them equally would sound very impossible. But that was what my Mama did. Her love was unconditional. In her court, being the elder would not make Mama tolerate oppression, and for the younger, ones, she would insist that they were obedient and respectful. The same love that she had for her children was what she extended to her extended family and everyone she had contact with.

My mother was an entrepreneur, a jack of all trades and master of all. She was an eko (corn pap) maker and seller. We, the children at different stages of growing up had to help her do a lot of selling on the street. She was also a garri seller. There were other petty things she harvested from farm, bought and sold to make ends meet. When her mother, Eye Lisa passed on, my Mama took over the basket for selling cola nut and bitter cola and carried on the trade. And all the time, from her sales, the family fed to their satisfaction with hardly anything left as profit margin.

Mama was a devout Christian who loved God with all her heart and soul. Even as recent as last year, she still accepted and hosted the Alaga Ikore during the annual harvest in her church. She played her part in the house of God and in her age group association- Egbe Majekobaje without blemish.

Just as it was then when Paul, standing in the midst of the Areopagus, said ‘Ye men of Athens, I perceive that in all things you are too superstitious’, so it remains in our communities up till today. Raising eight children in an environment where many forces could be daring was not a child’s play. My mother was forced to become a prayer warrior. She was always very proactive. Whenever she suspected anyone trying to manipulate her in the spiritual realm, she would dare them in real life, and this sometimes made them to retreat! I remember we had a great laugh over one of her close friends who attempted to lure Mama into a strange group. After Mama was through with her, she never stepped into our house again.

My mother’s life was an open book on giving. I can never imagine anything that was too big for her to part with. Whenever we visited home and dropped money for her to take care of herself, she would ask whether we had given to certain relatives. If we had not, you can be rest assured that she would share what you’d given to her and tell the recipients that she was sent by us to give to them. While my mother would love to give to others, she would try as much as possible not to be a burden to others. I remember few years back, when we took her to hospital in Lagos for medical check-up, Mama was so concerned about what it would cost us in time and money to take care of her.

To say my mother was a disciplinarian would be an understatement. When we were still young, she was extremely tough. In fact, she was a lioness. We couldn’t escape her punishment when we screwed up on important things then. Mama could attack you with anything! Our father would take it up from there if it was something serious. But as she grew older, all these suddenly changed. From combative, she changed to a protective mode. No doubt, our junior ones had it easier.

The best cook in the world

I don’t know how she did it, but my Mama was the best cook in the world. Even if it was a quarter of a fish that she could afford, you cannot match the taste of her soup every day. That fraction of the fish or meat would be sufficient for us and you will never look at anyone else plate. I cannot remember ever going to bed without a satisfying dinner, mostly pounded yam. With her cooking, Mama thought us how to be contented and happy with what we have. I remember an incident when a primary school friend of mine who was hawking roasted fishes for his mother branched at our home. He wrapped a whole fish in the presence of my mother and gave it to me as a gift. My body was shaking as I coiled away in horror. He immediately understood and returned his gift. But my mother never made mention of it again. Like my father would say, you should remember the child of who you are. With her cooking, spoken and unspoken words, I grew up not knowing how to eat outside.

Like every mortal, my mother had her own share of high and low times. On February 7, 1993 she lost her first child, her only female child, my loving sister at the age of 39 after five children who are now doing wonderfully well. She was inconsolable for a long time. It was the first time I noticed that she was almost convinced that going to church alone may not be enough to shield her children from evil attacks, unlike in many homes where children were carrying different levels of razor blade incisions.

The welfare of her children and family was the nucleus of my mother’s dream. We were too many in need of care to give her any room for personal ambition. Her love was unconditional. With my mother, you cannot live to be uncaring towards your siblings and anyone around you. Her life was a great lesson on selflessness.

My mother’s sense of humor, like my father was legendry. When we visited home, she would sit with us till late in the night as we shared jokes on our plights and laughed away our sorrow.

One of our prayers that God answered was for Mama not to witness the death of her remaining seven children again. It has been very challenging, but our biggest inspiration is her value. It’s like the sun. Once we keep it, we will rise again and fulfill destiny.

Thank you so much my mother for all what you gave me. There is nothing I can ever compare to you.

Link your NIN to your SIM before ...