Tribute: The Maradona I knew, by Mutiu Adepoju

Mutiu Adepoju, a member of the Super Eagle’s squad at the U.S.A. ’94 World Cup, on Wednesday paid tributes to the legendary Diego Maradona, who died on Nov. 25, describing the Argentine as one of the greatest to have ever played the game. 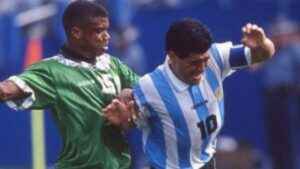 Sunday Oliseh and Maradona at USA’94

Adepoju in his tribute said that the late football icon was only able to outwit his teammates during the World Cup showdown when they lost concentration.

Adepoju, who was nicknamed ‘headmaster’ because of his prowess in the air with precise nodding of the ball, was one of the central midfielders that faced Maradona during Nigeria’s second match at the World Cup.

Nigeria lost the match to Argentina after Claudio Caniggia struck twice in quick succession from Maradona’s assists, in the 22nd and 29th minutes of the keenly contested match, to cancel out Samson Siasia’s goal that was scored in the eighth minute.

While reflecting on the life and times of Maradona, Adepoju described him as one with incomparable skills and ingenuity on the field.

“Maradona was a great player no doubt, one of the greatest ever in football, and it is quite unfortunate that we have to lose him at that age.

“I was shocked when I heard about his demise, but as we know we will have to leave this world one day.

“Maradona was one of the legend of all times. He can singlehandedly create havoc for opposing team and win any game on his own. I just wish him eternal rest.

On what transpired during the showdown between Nigeria and Argentina  at U.S.A. ’94 when the Eagles lost their second match to the Maradona captained side, after defeating Bulgaria in their opening match; Adepoju said that the loss was due to loss of concentration.

“It’s not that we are scared of Maradona when we faced him at  U.S.A. ’94 World Cup, but we respect him as one of the best footballers in the world that can cause havoc to us.

“For me, playing against him, I was being respectful and very much aware of what he can do and we managed that very well if not for the loss of concentration at that moment.

“We are a quality side in our own right, and we really took care of him in the midfield and managed him very well, we cannot be more careful with such a great player.

“We knew that he can create problem for us and not that we are scared of him, but respect for his status as an experienced player and his personality. We had a good game against him, he said. (NAN)