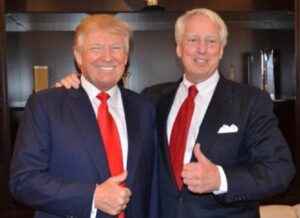 U.S. President, Donald Trump, has lost his younger brother, Robert, the White House announced in a statement on Saturday.

Robert, 71, died a day after the American president paid him an emotional visit on his hospital bed in New York.

“It is with heavy heart I share that my wonderful brother, Robert, peacefully passed away tonight.

“He was not just my brother, he was my best friend. He will be greatly missed, but we will meet again.

“His memory will live on in my heart forever. Robert, I love you. Rest in peace,” Trump said in the statement, which was silent on the cause of death.

According to reports, the deceased was a business executive and real estate developer, who avoided the spotlight unlike the president.

Trump, 74, had expressed worry over his brother’s health during Friday’s visit to him at the New York-Presbyterian/Weill Cornell Medical Centre. (NAN)