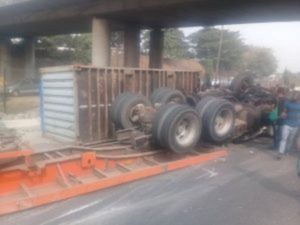 The Federal Road Safety Corps (FRSC) RS 2 Command, Lagos, says it has arrested 26 drivers over unlatched containers on their articulated vehicles in Lagos and Ogun, as it begins a Special Operation.

Mr Imoh Etuk, FRSC Zonal Commanding Officer in charge of both states, made this known on Monday in Lagos.

The operation tagged: “OPERATION SCORPION II”, is expected to run from Aug. 10 to Aug. 16.

It is aimed at clamping down on unlatched containers on articulated vehicles in Ogun and Lagos States.

Etuk, an Assistant Corps Marshal, said at the flag off of the operation at Ojota Toll Gate, on Lagos-Ibadan Expressway, that the arrested drivers of the articulated vehicles would be prosecuted.

He said that the operation would tackle the menace of road traffic crashes caused by unlatched containers on trucks and articulated vehicles.

According to him, some of the traffic offences in focus include: driving without valid driver’s licence, expired or worn-out tyres, dangerous driving, driving under the influence of alcohol and drugs and speed limit violations.

“We intend to achieve sanity on the roads and discipline on highways. We have done a lot of public education and enlightenment, now we are biting and we are biting hard.

“As at the time we were at Ojota Toll Gate on Lagos-Ibadan Expressways, we have clamped down on 26 truck drivers for various offences.

“Many of the arrested vehicles were unlatched, used worn-out tyres and other offences,” Etuk said.

The FRSC boss, who described the operations as a well-packaged enforcement, said it would run for an initial period of one week and would be assessed before continuation.

“We advise truck operators to ensure all containers on trucks are latched; they should use good tyres, avoid overloading and ensure drivers are licenced.

“The FRSC will continue to enforce all regulations as stipulated in the law to ensure safety on the highways.

“With regard to Regulation 151 of the National Road Traffic Regulations (NRTR 2012), articulated vehicles carrying containers should be properly latched.

“We demand that all vehicles carrying containers and/or goods must be adequately secured/latched,” he said.

The enforcement team moved from Ojota Toll Gate to Move and Ogere along the same corridor for the special operation. (NAN)