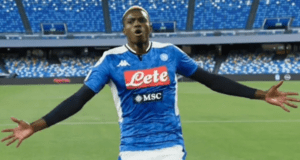 Nigeria’s Victor Osimhen’s club, Napoli,  president Aurelio De Laurentiis has tested positive for the Covid-19 a day after taking part in a Serie A meeting for club bosses, the team confirmed on Thursday.

The 71-year-old De Laurentiis received the positive result from a test taken on Wednesday, said Napoli.

But the Serie A club did not provide further details.

Serie A hosted Wednesday’s meeting with representatives from the league’s 20 clubs in Milan.

It was decided the league should form a new company, with the help of external investors, to market media rights.

Potential consequences of De Laurentiis’ infection for the Napoli team were not immediately clear.

Coach Gennaro Gattuso’s team open the new campaign away to Parma on Sept. 20.

Osimhen joined Napoli this year from Lille of France after a record transfer fee and has been the rave of reviews banging in as many hat-tricks in pre-season friendlies.

Vehicles to use gas from next month ...