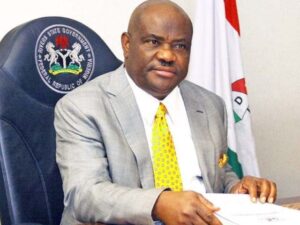 Governor Nyesom Wike of Rivers does not trust President Muhammadu Buhari to conduct a free, fair and credible election in 2023.

The governor in a social media post said neither Buhari nor his party, All Progressives Congress, APC, is interested in conducting a free and fair election.

Wike also lashed out at lawmakers who recently voted against electronic transmission of election results, saying they should be ashamed of themselves as they are enemies of the country. He described their action as a coup against the country.

“Mr President can’t tell us he sincerely wants to conduct a free, fair and credible election if he/his party rejects transparency and the electronic transmission of results.

“Those who voted against electronic transmission of results should be ashamed of themselves as they are enemies of the country. It is a coup against the people, the National Assembly has plotted a coup against Nigerians.

“If Nigerians were serious none who voted against electronic transmission of results would be able to go home to their constituents.”