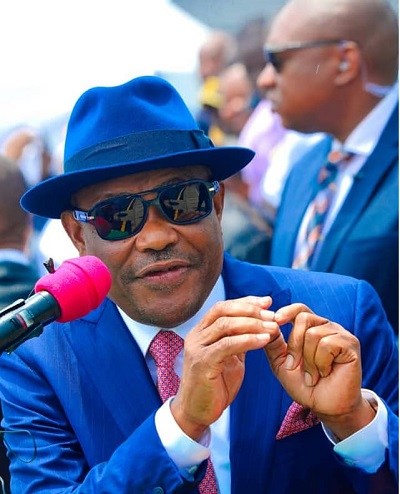 Governor Nyesom Wike of Rivers State has blamed the lingering crisis within the camp of the Peoples Democratic Party (PDP) on the failure to zone the party’s presidential ticket to a particular region. He picked on the trio of Atiku Abubakar, Iyorchia Ayu and Aminu Tambuwal as conspirators to undo him and zoning of Presidency to the south.

He described Atiku as untrustworthy and Ayu as corrupt.

Fielding questions from select journalists during a chat on Friday in Rivers State, he stated that the main opposition party ignorantly planted a seed of discord by leaving the ticket open for all to contest.

Wike described the actions and conduct of PDP Chairman, Iyorchia Ayu, as dishonest and lacking in character.

He said: “Imagine a national chairman, Ayu went ahead to describe Tambuwal as hero of the convention. You heard what Jang said, he described Ayu as a referee who helped one of the sides to score a goal and then blew a whistle that a goal had been scored.

“There’s nothing Ayu did not do for me not to emerge as the PDP candidate. Ayu did everything to manipulate the system to ensure that all the numbers did not add up,” he said.

“Those who thought they are too powerful, highly connected, and that they own the party said there should be no zoning of the presidential ticket – ‘leave it open and let the best candidate emerge’ – because they think they have the numbers.

“We jettisoned our constitution not knowing that we are laying the foundation, the seed of discord in the future,” he said.

It could be recalled that crisis in the PDP began weeks ahead of the party primary in May.

This was a result of the failure of the party’s leadership to zone the presidential ticket to the southern region of the country.

The aggrieved persons, especially party leaders from the South, said it would be morally right to zone the ticket to the region since the PDP national chairman had emerged from the North.

Wike  also told journalists at the chat that APC Presidential candidate Bola Ahmed Tinubu met him amid the PDP crisis and persuaded him to go for the senate, but he rejected the offer.

The Rivers State Governor added that he refused to make decisions that will affect the overall interest of the party despite the internal crisis at the national level, which he claimed was fomented by Atiku, Sokoto State Governor, Aminu Tambuwal and the party’s chair, Iyorchia Ayu. He insisted  that Ayu should  step down and give room to equity and fairness in the party.

Asked if his actions after the primaries were not traits of a bad loser, he replied, I never collected senatorial form, other candidates did and that is how you know those who are serious and those who are unserious.

He said that he didn’t contest for the ticket because he wanted to settle for the position of vice president.