Breaking NewsBusiness & Economy
Home›Breaking News›WTO: Okonjo-Iweala, four others advance to next round

WTO: Okonjo-Iweala, four others advance to next round 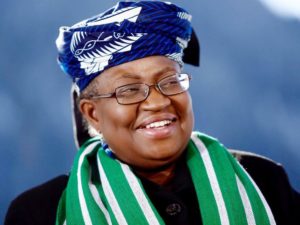 Dr Ngozi Okonjo-Iweala, Nigeria’s candidate aspiring to the position of Director General of the World Trade Organisation (WTO) has won the first run of elections and has àlong with four others advanced to the second phase..

The other contestants, who are from Kenya, South Korea, Saudi Arabia, and the UK, on Friday advanced to the next round of voting after six days of confidential consultation with members.

Amb. David Walker, Chair of the WTO General Council in a briefing on the outcome of the election told the Head of Delegation meeting that the entire organisation’s membership was committed and fully engaged in the consultation process.

“Throughout the six days of consultations it was clear to us that the entire membership is both committed to and fully engaged in this process.

“Members consider all the candidates highly qualified and respected individuals.

“I would also like to pay tribute to the dignified manner in which they, their delegations, and their governments have conducted themselves in this process.

“Their willingness to engage, especially at these challenging times, has been greatly appreciated, and the organisation is in their debt,” Walker said.

During the consultations, Walker alongside his co-facilitators in the election process, posed to each delegation one question: “What are your preferences?”

Members then submitted four preferences to the “troika” of ambassadors.

The facilitators are Amb. Dacio Castillo, Chair of the Dispute Settlement Body, and Amb. Harald Aspelund, chair of the Trade Policy Review Body.

The consultation process taken by facilitators has been set by guidelines established by the General Council in a 2002 decision.

Based on the guidelines, the key consideration in determining which candidate is best poised to achieve consensus is the “breadth of support” each candidate receives from the members.

Walker said that the second phase of the consultations would begin on Sept. 24 and end on Oct. 6.

“During this time, members will be asked in the confidential consultations to express two preferences. (NAN)