Youth Assembly to Buhari: Tell military to stay away from #EndSARS

The World Assembly of Youths (WAY) on Monday appealed to President Muhammad Buhari to restrain the military from the ongoing #EndSARS protests. 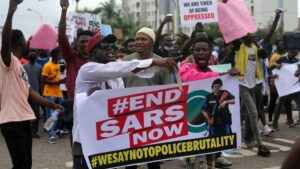 The WAY Vice-President (Africa), Mr Preye Ketebu-Brown, made the appeal in an interview with the News Agency of Nigeria (NAN) in Yenagoa.

“While I urge the youth to maintain their peaceful disposition in asserting their rights; I passionately appeal to the good conscience of President Muhammadu Buhari as a father, to hearken to the voice of youths.

“Also the Nigerian Army’s planned Exercise Crocodile Smile VI should be restricted to its war theatre.

“The frustration brought about by untold hardship Nigerian youths have faced over time, compounded by high-handedness of security operatives (SARS) in recent times has led youths to the streets.

“It is also pertinent to highlight that the demands of the youth are sanctioned by relevant charters and instruments governing youth development globally, regionally and nationally,’’ Ketebu-Brown said.

A mob protesting police brutality on Sunday in Yenagoa, attacked the President of Ijaw Youth Council (IYC), Mr Peter Igbifa, over alleged reluctance to call out Ijaw youths to join the ongoing protest against Police brutality in the country.

Igbifa was at the Bayelsa Government House on a courtesy visit to Gov. Douye Diri, but he met a crowd of protesters who booed him.

Igbifa was eventually guarded out of the rowdy situation by some bodyguards and few Ijaw youths that accompanied him as the protesters continued using obscene words on him.

Reacting, the spokesman of the Ijaw Youths Council, Mr Ebilade Ekerefe, described the action of the angry protesters as a sacrilege.

“IYC is a movement that is founded on principles with a clear mandate and therefore, cannot jump into the arena of socio-political struggles without studying the unfolding developments and the positive impact such struggles will bring to the table for our people.

“It is against this background we share solidarity with the bravery and the undying spirit of the Nigerian youths who have suffered directly police brutality, oppression and intimidation,’’ he said in a statement. (NAN).