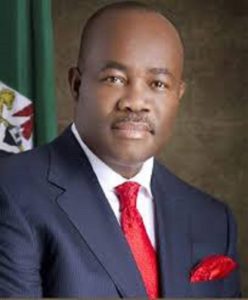 A youth group under the aegis, Nigerian Youths Leadership Initiative (NYLI), has resolved to throw its weight behind the former governor of Akwa Ibom State and currently Minister of Niger Delta Affairs for the office of President of Nigeria come 2023.

In a Conference/ Extraordinary Meeting christened TAKING LEADERSHIP CAMPAIGNS TO KATSINA, and held on September 10 in Katsina, the group resolved that Senator Akpabio’s pedigree and well known transformational leadership qualities makes him the best bride in the circumstance of 2023.

The group which has saddled itself with the task of searching for good leadership in Nigeria lauded the Minister of Niger Delta Affairs, Senator Godswill Akpabio for his forthrightness which saw to the successful completion of the Forensic Audit of NDDC and the subsequent presentation of the Report to Mr President despite odds, unrestrained cynicism and seeming unremitting distractions that dogged the exercise from inception to almost conclusion.

The group commended Akpabio for the extraordinary courage and patriotic commitment to service delivery that would advance the cause of the Nation citing the discovery of 13, 700 abandoned projects of NDDC, stating that it takes commitment and sincere love for the Nation for one to tread the dangerous course of changing a filthy and fossilized status quo in a Commission that long existed as cash cow to contractors and politicians.

The organization was also full of commendation for President Muhammadu Buhari and lauded the exemplary courage he demonstrated in his resolve to support the exercise as well as the Minister without yielding to the enormous pressure by people who sought to ensure that the exercise never saw the light of the day and that the status quo of monumental sleaze continued unabated.

NYLI noted that it has in line with its vision of searching for good leadership taken cognizance of the giant leaps recorded by the Minister of Niger Delta Affairs especially on the 24 years old uncompleted NDDC Headquarters Complex which Akpabio finally ensured completion and eventual evacuation of staff from Aba Road where the burden of dubious and outrageous rent had remained a huge toll on the Commission’s finances for more than two decades.

The Chairman of Conference/ Extraordinary Meeting, Dr Aliyu Abubakar in his comment appreciated Akpabio’s decisive decision in leadership and urged him to present himself for Presidency in 2023 adding that the group is ready and willing to drum up support for him across the country.

Dr Abubakar said that the organization has agreed to bring together a coalition of 50 million youths under the aegis of North- South Youth Alliance for Uncommon Transformation to take the message of uncommon transformation which is Akpabio’s defining hallmark to the doorsteps of every Nigerian youth and to all nooks and crannies of Nigeria.

The convener of the Conference/Extraordinary Meeting and member of BOT Comrade Emmanuel Amama who travelled to Katsina for the event in his speech went down memory lane on the many legendary achievements of Senator Akpabio while he was governor of Akwa Ibom State from 2007 to 2015.

Amama described the period as the glorious and defining moment of the State citing the many projects to wit: human capital development, empowerment programmes, social investments, infrastructural revolution and even the revolution of mindsets as eloquent testimonies of what the Akpabio Administration accomplished.

Going into some specifics, Amama mentioned the Godswill Akpabio International stadium, the Specialist Hospital, the ICT compliant Governor’s Office, the architectural masterpiece Governor’s Lodge, the E- Library, the Four Point by Sheraton, the pipe jacking technology that has helped to deflood Uyo which is a table land, the Tropicana Galleria, the Free and Compulsory Education, the Free healthcare to segments of the society and the integration of youths into the business of governance.

The one time Chairman of Obot Akara Local Government Area in the era of Godswill Akpabio thanked participants at the Conference and Extraordinary Meeting adding that he would take the good news of love and solidarity for Akpabio by Nigerian youths to Akwa Ibom State and convey same to His Excellency, Senator Godswill Akpabio.

A Royal Father, Engr (Dr) Kabiru Yamel, Sarkin Aikin Kasar Hausa who was present at the event expressed delight with the initiative adding that the project has his full blessings and he would continue to support the project.

The Royal Father urged participants to mobilise Nigerian youths to rally around the choice they have made stating that he is personally convinced that they have searched painstakingly and made a credible choice in the person of the Minister of Niger Delta Affairs, Senator Godswill Akpabio.

The Nigerian Youths Leadership Initiative (NYLI) also used the platform of the Conference to felicitate with its BOT member and executive director, Administration , Alhaji Haruna Dalhatu on his recent conferment of the chieftaincy title of Sarkin Zangwa Katsina by the Emir of Katsina and urged him to continue to exude the positive leadership values that have endeared him to his friends and admirers.

Who is after Godwin Emefiele, by Ahmed ...