Zulum leads others in Eid prayer amid tight security 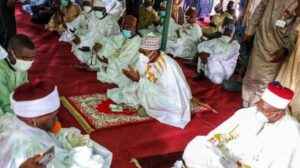 Gov Zulum and others pray

This year’s Eid like in the previous years, attracted hundreds of Muslims faithful including men, women, children, old and young who turned at various prayer grounds to observe the prayers.

Gov. Babagana Zulum was among other dignitaries that joined other worshippers at the Ramat Square prayer ground in Maiduguri.

Faithful had to trek long distances in some places to attend the prayers due to restriction of vehicular movement by the police for security reasons.

Security operatives deployed at various designated prayer grounds in the metropolis also enforced use of face mask and other COVID-19 preventive measures.

In his sermon, the Chief Imam of Borno, Laisu Ibrahim, urged Muslim faithful to live in peace with one another and always pray for an end the insurgency and other security challenges facing the state and the country in general.

Ibrahim also called for support to the government in its efforts to restore peace and normalcy in the state.

Speaking shortly after the prayer, Gov. Zulum, lauded the people of the state for their sustained support to his administration, which he said would continue to deliver on its mandate.

“Let me use this opportunity to convey my heartfelt appreciation to the people of Borno for the enormous support to the government which has enabled us to focus on our campaign promises.

“So far so good, we have spent one year in office and would continue to focus more on security and another very important segment which is job creation.

“In the last one year we have been working toward restoring peace and returning people back to their homes. The Most important thing is how we can provide access to our people to return to farming activities.

“In the subsequent years, we shall be concentrating on education and provision of affordable healthcare for our people,” he said.

Some worshippers, who spoke to NAN, commended Gov. Zulum for providing quality governance in the state.

Mele Bulama, lauded the Governor for prioritising attention to restoring  normalcy, so that people can return to their homes.

Bulama urged security agencies, federal government and the humanitarian agencies to support the governor’s policies and programme of restoring lasting peace to the state.(NAN)

Kaduna is not the only State facing ...