Delta at 30 and Okowa’s moment in history 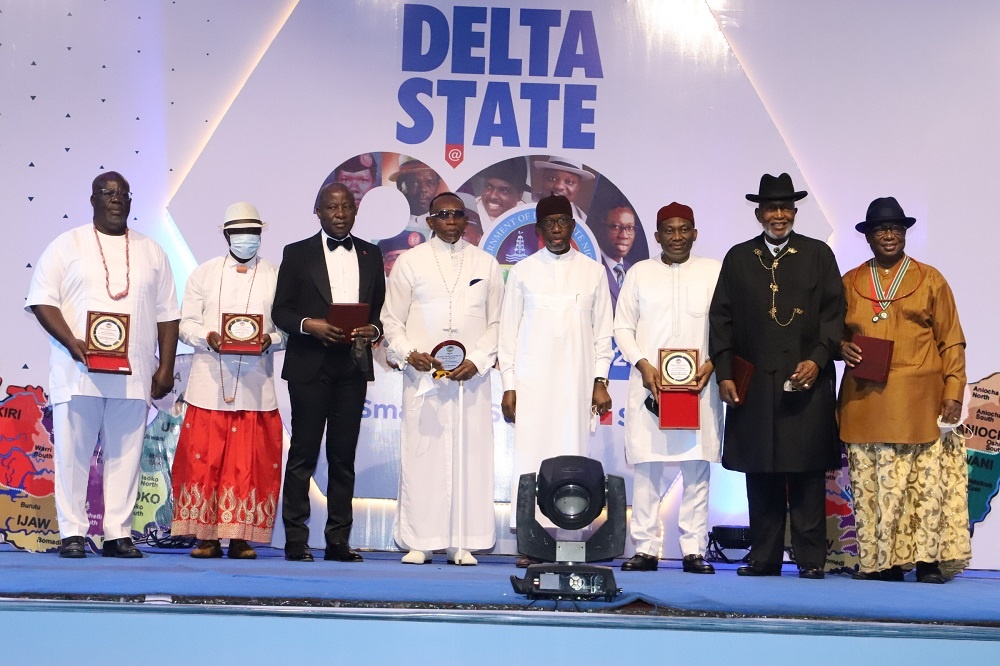 Delta at 30 and Okowa’s moment in history

Last month, precisely on August 27, Delta marked its 30th anniversary as a state. A ceremony for buntings and banners. A moment for confetti and colour-scape. Governor Ifeanyi Okowa bears the historical fortune of overseeing the state on its 30th birthday. And he did what had never been done before. Aside the rituals of speeches, memorials and mementos, the governor walked a different path. An uncharted course.

He decided to honour a certain category of Deltans. Men and women who had distinguished themselves within the state, in Nigeria and globally. Hardly is a prophet honoured at home. The Bible, the Holy Writ, even acknowledges this: that prophets are seldom recognised or garlanded in their homes. It’s a cruel code of life. Prophets are not ordinary beings. They are gifted with the rare intuition and unction to speak the mind of God. They don’t come cheap. Yet, they are cheapened by their own people. Unappreciated by their community.

It’s also, very sadly, the lot of heroes and heroines. Often men and women of existential distinction are commonised by their own people, their brothers and sisters. Not even when such men and women are robed in splendour in far-flung lands, among strangers. They are at home neglected, ignored. Their accomplishments which became their passwords to glory in other lands are passed off as worthless in their own land.

Delta, split from the old Bendel State (former Mid-West region), on that fateful August 27, 1991 by the military regime of Ibrahim Babangida, was severed from the union with the full complement of its DNA: A people of academic excellence, sporting prowess, dash and style, chutzpah, élan, creativity, resourcefulness and uncommon pluck often misinterpreted as pride by outsiders. It’s this innate brio and unvarnished bravery that has made the state the think-tank of the nation; a foundry of the best species of Homo sapiens in all worthy human endeavour. At home and abroad, Deltans have continued to astound the world.

So, when the state turned 30 and Okowa decided to, in addition to the usual ceremony of rolling out the red carpet amid public lectures, add a special topping to the menu of activities by garlanding a few Deltans with epaulets of honour and medallion of glory, it came to many as a fitting break from the past. This gesture is far beyond Governor Okowa. It’s the whole state appreciating its own, a token of unsullied gratitude from Deltans to Deltans. And the cast of honourees? A rich mix of men and women who have raised the bar both at home and abroad in entrepreneurship, banking, media, academia, politics, diplomacy, science and technology, sports, administration and management, indeed in all facets of human exertions.

The cast of Lifetime Achievement awardees also has well-heeled diplomat, former Foreign Affairs Minister and first woman to hold the post of Permanent Representative at the United Nation in the history of Nigeria, Professor Joy Ogwu; and fiery Pastor and popular televangelist Ayo Oritsejafor. The doyen of the Nigeria comedy fraternity Atunyota Akpobome aka Alibaba; his counterpart in the music industry, the dexterous Michael Collins Ajereh (Don Jazzy), Olympic medalist Ese Brume and record-holder in swimming, the sensational Timipamere Akiayefa were also honoured.

Chief Mukoro Mowoe, politician and businessman; Chief James Otobo, administrator, politician and  former Deputy Premier of Mid-West region, and Chief Dennis Osadebay, the hugely influential politician and former Premier of Mid-West were honoured posthumously. About 18 outliers from the state were robed in grandeur as a show of appreciation for their efforts in keeping the Delta spirit alive and for showing to the world that Delta is beyond a state in Nigeria, it’s a treasure trove of all that’s good, noble and excellent in humanity.

The Governor aptly summed up the essence of the awards thus: “We decided to recognize some of our distinguished sons and daughters, and to also use the opportunity to let the whole world know the invaluable contributions Deltans are making to project Nigeria.”

Indeed, Deltans have made and are still making invaluable contributions to the world. From space science to liberal arts, theatre to healthcare, sports to ICT, Delta with a population of a little above four million is arguably the salt of the nation. Its asset remains the rich repository of capable human capital, not the buoyant deposits of crude oil, gas and an assortment of minerals including silica, kaolin, limestone, industrial clay, among others. On the national canvas, Deltans have added immeasurable value through quality service and brilliant interventions. A majority of the most successful media outfits in Nigeria, print and electronic, are owned by Deltans. The success stories of banking in Nigeria has the imprimatur of Deltans all over it. The state is a major contributor of sportsmen and women to the national matrix.

On the international circuit, they have continued to outshine competition, confounding even Westerners in western education, manifesting exceptional creative skills and building successful businesses from cradle to the crest. Deltans have over the years helped to burnish the international image of Nigeria by manifesting bright sparks in their respective engagements and endeavour across the globe. It’s only fair that Deltans who in their lifetime brought honour and glory to the state, nation and the rest of humanity through service be honoured at home. Okowa just did that.

And the honorees are brimming with gratitude. To them, despite winning and garnering awards over the years, this special recognition from their state betters the rest. Pastor Oritsejafor who spoke on behalf of the other recipients referenced the Biblical dictum of a prophet not being honoured in his home. He commended Okowa for showing that prophets are worthy of their honour even in their homes.

Overall, celebrating Delta at 30 in one piece and in peace testifies to the resolve of the people to live together. It speaks to their resolute spirit to triumph over trials, diminish the fault lines that strive to tear them apart and maximize the virtues and creeds that bind them. It’s a testament to how best to manage diversity in a secular, multicultural community. This is what Nigerian leadership at the national level has not been able to achieve.