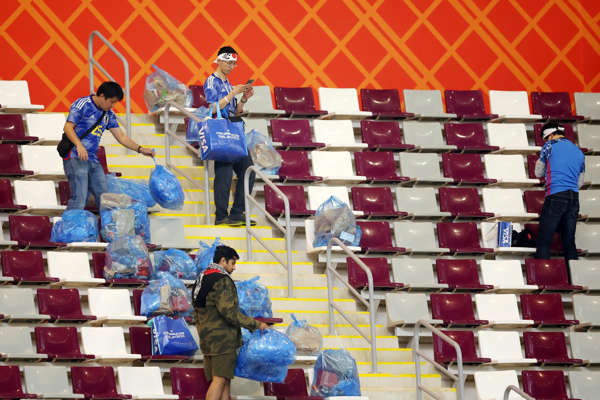 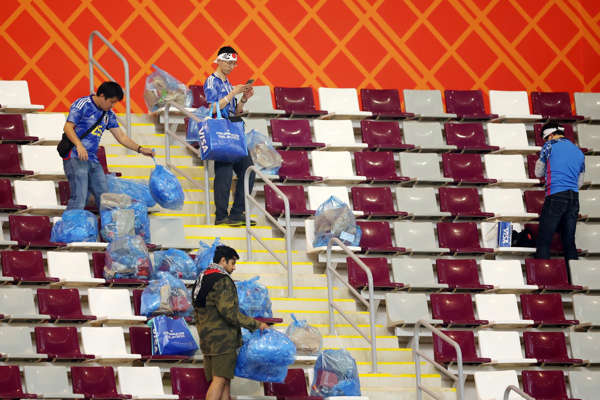 Japan came back from behind to win 2-1 thanks to second-half strikes by Ritsu Doan and Takuma Asano, the latter with a brilliant individual goal which secured the Group E victory over the four-time world champions.

Video on social media showed Japanese fans filling rubbish bags with litter and rubbish from around their seats after the full-time whistle.

Such images have become commonplace at major tournaments and were also seen at the men’s World Cup in Russia four years ago, garnering praise from around the world after their team were knocked out of the tournament by Belgium in the round of 16.

Cleaning up after themselves is an important part of Japanese culture ingrained from youth, and tends to draw admiration from the rest of the world. The Japan players were also praised for leaving their changing room “spotless” after the match.

One social media user, @kazki_reserve, commented with a Japanese proverb: “A bird does not foul the nest that it is about to leave.”

Another Twitter user wrote: “Something that they always do even in their own stadiums. Part of the culture. And something other should do alot more”.

After an historic victory against Germany at the #FIFAWorldCup on Match Day 4, Japan fans cleaned up their rubbish in the stadium, whilst the @jfa_samuraiblue left their changing room at Khalifa International Stadium like this. Spotless.

This being the age of social media, there is always criticism to be found and one user was quick to point out that the Japanese fans appeared to be using plastic bags to collect the rubbish. “It’s great but look at the amount of plastic waste there is!” chrispeel28 tweeted. “Their efforts are almost immediately undone by the damage the single use plastics they are clearing all of the other single use plastics into! Lovely sentiment but execution missed, perhaps not their fault.”

And in a wry nod to the more loutish English fan culture, J_Morgs8 tweeted: “No different to the England fans clearing away the chairs outside pubs in Europe.”

Japan take on Costa Rica in their next Group E fixture on Sunday, before facing Spain on Thursday, who thrashed the Costa Ricans 7-0 in their opening game.