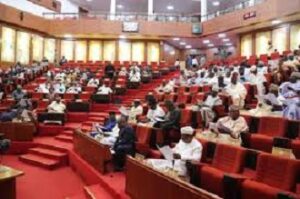 Twenty-seven State Houses of Assembly have forwarded their resolutions on 35 constitution amendment bills to the National Assembly.

Channels Television reports that the Senate has consequently directed the Clerk of the National Assembly to transmit the 35 constitution amendment bills that have so far met the requirement of the provision of section 9(2) of the constitution to President Muhammadu Buhari for assent.

The upper chamber also asked the remaining nine state Houses of Assembly that are yet to forward their resolutions on the constitution amendment bills to do so to fulfil their constitutionally imposed legislative obligation.

The state Houses of Assembly yet to forward their resolutions to the National Assembly are: Gombe, Jigawa, Kebbi, Kwara, Oyo, Plateau, Sokoto, Taraba, Zamfara states.