Anyim to South West PDP delegates: Let’s have consensus on structure of Nigeria 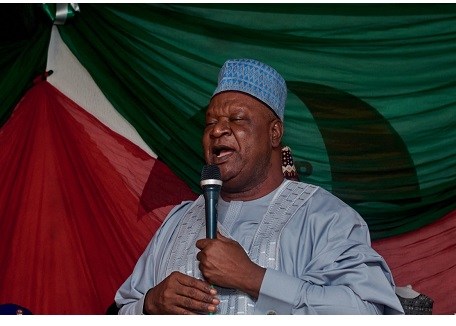 Anyim to South West PDP delegates: Let’s have consensus on structure of Nigeria

Foremost presidential aspirant on the platform of the Peoples Democratic Party (PDP), Anyim Pius Anyim has insisted that Nigerians have to build a consensus on the structure of the country for the nation to move forward.

Anyim stated this on Tuesday in Ibadan when he met with PDP delegates to the forthcoming national convention of the Party and other stakeholders of the Party.

The former President of the Senate told the delegates and stakeholders that he is fully prepared by his experience and exposure for the office of the President of Nigeria because he has clear ideas of the challenges facing the country and the  solutions they demand.

On the broad agenda of his programme, the presidential aspirant categorized Nigeria’s problems into three namely: political, economic and social.

He told his audience that he gathered profound experience from his over 30 years of public service including being a senator, President of the Senate, and secretary to the government of the federation (SGF) adding that he would be bringing these experiences in running the country if Nigerians elect him as president next year.

Said Anyim, “From the vantage positions I have held; I understand the challenges confronting our nation today and I have clarity of what the solutions could be.

“The purpose of my being here today is to present to you my informed pathway to rebuilding and refocusing our country on the path of growth, peace and prosperity.

“I shall outline my understanding of the problems and my evidence-informed pathway to resolving them under three broad categorizations: Political, Economic Social integration”, he stated.

On political foundation, Anyim posited that: “In formulating political policies for greater Nigeria, my administration shall take into consideration the following challenges of our time” insisting that “the greatest challenge of our nationhood today is the lack of consensus on: the structure of our nation! the governance system and National ideals or aspiration.

“I make bold to say that the absence of consensus on these areas accounts for the disunity and mutual suspicion that threaten our country today”, the ex SGF contended.

Anyim went further to say that “at the formation of our nation (Union) there were lots of negotiations, constitutional conferences and even the Willinks Commission to allay the fears of the minority tribes.

“The lesson here is that the buy-in of all component segments of the nation is required to build the nation.

“As part of our political consolidation process, “we shall provide a platform for broad-based consultations and frank dialogue on a generally acceptable new foundation for our nation.

“We shall put the machinery in place to harvest the views and secure the buy-in of all components of our polity and build consensus on, the structure of the federation, an acceptable governance system and benchmark agreed national aspiration to which all shall commit”, he added.

Anyim also promised that “Consensus building shall be the hallmark of our administration” and that “we shall deploy a visionary leadership style that shall respond to the aspirations of the people.

On the anticipated outcome of his programmes, the presidential aspirant said: “mutual suspicion will be eliminated, unity of purpose will be ensured, patriotism will be inspired, and we shall be united in our commitment to building a nation of our dream.”