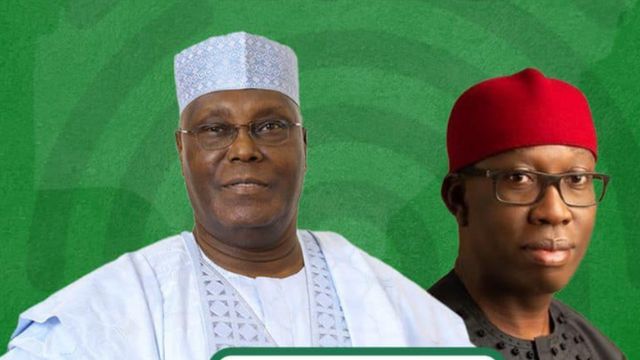 The Centre for Integrity and Good Governance (CIGG) has said that the choice of who becomes his running mate is the constitutional prerogative of Atiku Abubakar, the Presidential standard bearer of the Peoples Democratic Candidate (PDP).

Atiku had after he emerged as the Presidential candidate of the PDP picked Delta State governor, Dr. Ifeanyi Okowa, as his running mate.

The Centre in a press statement issued on Wednesday in Lagos by its Convener, Mr. Waheed Aderibigbe and Co-convener, Mr. Obinna Ukariaku, said it was shocked that some Nigerians would jettison the provision of the constitution of the Federal Republic and choose to play to the gallery or even base their argument on emotional sentiments.

The CIGG which says one of its goals is to promote democratic and electoral literacy, explained that the most any political party can do is to present names of probable candidates to a standard bearer from which he or she can pick the vice-presidential candidate of his or her choice.

The group said Atiku in fidelity to the extant law exercised this power and privilege which the constitution vested in him, stressing that any input from the party stakeholders including the National Working Committee, the Board of Trustees (BoT), elders of the party, among others, is advisory.

The Centre faulted the comments of the Governor of Benue state, Samuel Ortom, who said the party would have picked Governor Nyesom Wike of Rivers as Atiku’s running mate.

The statement reads in part: “Atiku Abubakar has shown respect for the rule of law by following the provision of Section 142 (1) of the 1999 constitution as amended in choosing his running mate. He should be applauded for abiding by the law and making his choice as demanded by the constitution.

“The input or suggestion from any of the stakeholders in his party remains advisory, the onus to finally pick one person out of many rests on the candidate, not the party,” the statement said.

The PDP leadership had set up a committee with the mandate of nominating and submitting three names of probable candidates for the position of running mate to Atiku.

Contrary to claims of voting by members of the committee, the party had explained that the brief given to the committee did not include voting, but to nominate three names which would be forwarded to the standard bearer to choose from.

It could be recalled that while announcing Okowa as running mate, Atiku said: “In arriving at the decision, I held wide consultations with various stakeholders in our party, including our governors, National Working Committee, Board of Trustees, and other leaders to seek their inputs and their wisdom. In these consultations, I made it clear that my running mate would have the potential to succeed me at a moment’s notice, that is, a President-in-waiting. In other words, the person must have the qualities to be president.”