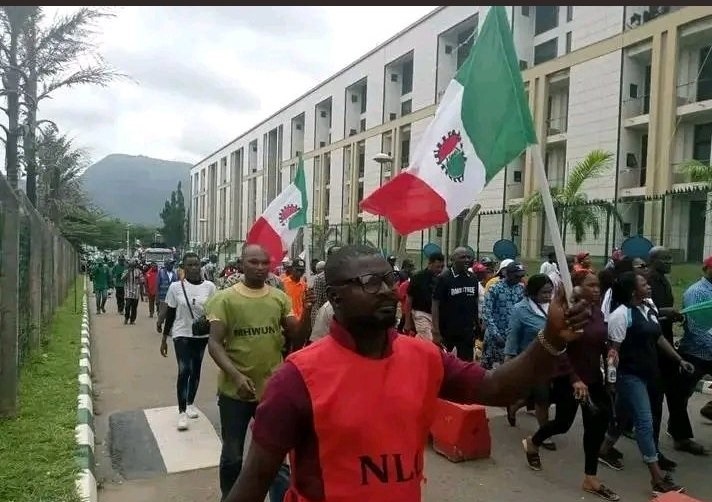 The Nigeria Labour Congress(NLC) has called on the Federal Government not to deny the children of the less privileged quality education in the country.

The NLC President, Ayuba Wabba, made the called, while presenting a Letter of Complain to the leadership of the National Assembly, on Wednesday in Abuja.

The NLC had organised an “Abuja Mega Protest Rally’’ in solidarity with the trade unions in the public universities over their lingering strike.

The protesters carried placards with inscriptions such as, “When enough is not enough’’, “Students are our assets”, “Pay our salaries according to the impact we make on the system’’, “IPPIS incompatible with university operations” among others.

The Academic Staff Union of Universities (ASUU) and other trade unions in the education sector have been on strike for more than five months over alleged failure of government to keep to agreements entered with the unions.

The demands of the striking workers include non-implementation of 2009 agreement, funding of universities, salaries and earned allowances of lecturers, among others.

“The reason we are here today is to let the Federal Government know that the children of the working class, the less privileged have been at home for the past five months, and nobody cares.

“No reason is good enough for the children of the working class and the poor to be at home for one day, whereas their children are graduating from Nigerian private universities and abroad.

“They have the audacity to post them on social media so that we can see,’’ he said

He said that the Federal Government must do the needful to respond effectively and promptly to resolve the issues affecting the education system.

The NLC president noted that over 10 million children in the public institutions including three sets were waiting for their admission to be sorted out.

“If we denied our children quality education, they will become menace to the society and all of us will be sleeping with our eyes opened, that is a reality and it is a wakeup call.

Wabba, therefore, called on government to listen to the cries of the poor as without quality education, there would be no peace for everyone, even democracy.

He said government must be ready to salvage the country and salvage the education sector at all levels.

“Those issues are straightforward; some of them are not even monetary policy issues. Yet our leaders cannot listen to fix those issues.

“It has been promises and those promises have not been kept, we are tired but we are not tired of their antics.

“We will take our destinies in our own hands and that of our children, which is very important and fundamental, ’’he said.

The NLC president added that it was time to reset the country to ensure that Nigerian leaders do the right thing.

He commended the lecturers, whose salaries had been stopped for over three to five months due to the fact that they were on the strike.

Wabba also added that workers were tired of lamentation rather they want solutions, stressing that they wanted the issues to be fixed.

“Workers must be ready, if the Federal Government failed to sort out the issues after this protest, we will embark on  a three day nationwide strike.

“We will not allow political elites to destroy the future of millions of Nigerian youths,’’ he said.

Also, Sen. Boroface Ajayi, who received the Letter of Complain on behalf of the Senate President, Mr Ahmed Lawal, commended the NLC leadership for the peaceful protest.

Lawal said that the National Assembly was working to ensure that the strike was call off and the students returned to school.

Also, Mr Mohammed Ibrahim, President, Senior Staff Association of Nigeria Universities called on the Federal Government to do the needful.

Ibrahim said that government should respect and honour collective bargaining agreement that they freely and mutually reached with the unions and also fast track the renegotiation of 2009 agreements. (NAN)