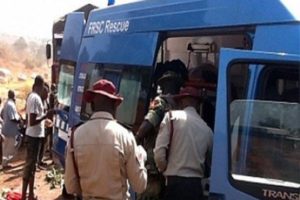 It was a bloody Children’s Day as the Kwara Command of the Federal Road Safety Corps (FRSC) confirmed that seven persons died in a road crash which occurred at Lumoh village along the Olooru/Bode Sadu road.

The FRSC Sector Commander in Kwara, Mr Jonathan Owoade, confirmed this in Ilorin on Wednesday.

According to Owoade, the accident, which occurred at the early hours of Wednesday, involved two vehicles; a commercial DAF tanker and a private Toyota Corolla car.

He said that seven people were involved in the crash, adding that all of them lost their lives.

“Early this morning we got report that there had been a road crash which occurred at the Bode Sadu/Oloru axis, at a village called Lumoh.

“Our officers at the Olooru unit command were there early, it was a fatal crash involving two vehicles, a DAF Tanker and a Toyota Corolla car, and seven persons were involved.

“Sadly all seven people involved lost their lives. There were four males and three females involved in the crash.

“The cause of the crash was as a result of speed limit violation and loss of concentration by the drivers.

“The corpses have been deposited at the University of Ilorin Teaching Hospital mortuary.

“I would once again plead with our road users to be safety conscious. FRSC officers have blood in their veins, it is sad for us to see humans like us lose their lives on the roads owing to crashes.

“We want to plead with travellers to caution any reckless driving or call our toll free number to report such drivers.

“Those who ply the Bode Sadu/Olooru/Jebba axis need to take extra caution, this is not a smooth road, and it is a winding road.

“Avoid over speeding, and be patient while driving. There is no perfection in driving; we all need to be careful so that lives are not lost on the roads,’’ the sector commander said. (NAN)