CBN, Osinbajo and devaluation of the naira, by Jackson Akpore 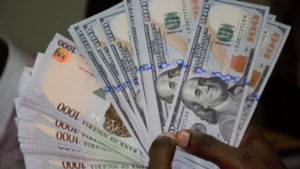 Not a few Nigerians were surprised at the outrage that greeted what has now been clarified as a mis-characterisation of Vice President Yemi Osinbajo’s submission at the mid-term retreat on President Muhammadu Buhari second tenure. Many had interpreted Osinbajo’s remarks as a call for devaluation of the naira. Hours after Osinbajo’s prescription, economists and experts of fiscal and monetary policies took turns to deprecate the vice president for recommending a therapy that could never help the naira  but would only herd it to the grave.

It was heartwarming, therefore, to see the vice president’s office promptly react to the outrage by offering an explanation on Professor Osinbajo’s intendment. Osinbajo was quoted widely as prescribing a devaluation of the naira by allowing market forces to determine its value.  Osinbajo had argued that the exchange was artificially low and that this has deterred investors from bringing forex into the country.

Osinbajo stated: “As for the exchange rate, I think we need to move our rates to [be] as reflective of the market as possible. This, in my own respective view, is the only way to improve supply. We can’t get new dollars into the system, where the exchange rate is artificially low. And everyone knows by how much our reserves can grow. I’m convinced that the demand management strategy currently being adopted by the CBN needs a rethink, and that is just my view.”

“For context, the Vice President’s point was that currently the Naira exchange rate benefits only those who are able to obtain the dollar at N410, some of who simply turn round and sell to the parallel market at N570. It is stopping this huge arbitrage of over N160 per dollar that the Vice President was talking about. Such a massive difference discourages doing proper business, when selling the dollar can bring in 40% profit!

“This was why the Vice President called for measures that would increase the supply of foreign exchange in the market rather than simply managing demand, which opens up irresistible opportunities for arbitrage and corruption.”

While conceding that the above was the import of what Osinbajo said at the retreat, his outburst still leaves a sour taste in the mouth. First, Osinbajo is the number two citizen of the Federal Republic. He has unfettered official access to the Central Bank of Nigeria, CBN, Governor, Mr. Godwin Emefiele. He could have used the official channel to advise the CBN.

Second, Osinbajo heads the National Economic Council, NEC, a strong and highly placed advisory body made up 36 state governors, CBN Governor and other co-opted top government officials. The NEC is not an illegal body. It was established by the provisions of the Constitution of the Federal Republic of Nigeria, 1999, as amended; Section 153(1) and Paragraphs 18 & 19 of Part I of the Third Schedule.

When President Muhammadu Buhari inaugurated the NEC on 29 June 2015, with Osinbajo as Chairman, its mandate was advisory. It meets monthly and its brief is to “advise the President concerning the economic affairs of the Federation, and in particular on measures necessary for the coordination of the economic planning efforts or economic programmes of the various Governments of the Federation.”

This presupposes that NEC has a full grasp of the policies of the federal government, including those of CBN. It’s therefore strange that Osinbajo who Chairs the NEC of an administration he’s the second-in-command would mount the podium to vilipend the fiscal policy of the same government. If anything, Professor Osinbajo made it look like he’s not a part of the government. Without dismissing the merit or otherwise of his argument, it’s hard to find any justification for his disparagement of the CBN policy on forex, knowing that what has put so much pressure on the naira is not what CBN failed to do, or is doing; but the exotic lifestyle of Nigerians coupled with the harsh reality that the nation has nothing to export except crude oil which Nigeria exports at cheaper price but spends more money to import, including paying subsidy, on the finished products.

It bears restating that but for Emefiele’s tact and courage to stop the forex funding of over 40 items the woes of the naira would have worsened and this would have translated to higher prices of goods. It’s unfair for anybody to accuse the CBN of being behind the stress on the naira. If the naira can lose its value and weight in the forex market at a time the CBN took the bold step of stopping the funding for the importation of rice, wheat, maize and other products that we can easily produce here, just think of what would have become of the naira if the importation of these over 40 products were still being funded by CBN from the scarce forex.

The problem of the naira is not CBN. The pressure on the naira comes from multiple fronts: Foreign direct investment has dropped – investors no longer see Nigeria as a secure place to plough in their funds; the nation is not producing enough for export except crude oil which she sells cheaply and imports all of its finished products at higher price. The nation’s primary sector is comatose hence there is absolutely nothing to export to earn foreign exchange. Maritime experts versed in international monetary policies have continued to advocate for a holistic federal policy that would strengthen export of goods from Nigeria. They argue that most of the ships that berth on Nigerian waters leave the country empty because they have no goods to ferry offshore as export. Some others leave Nigerian waters and go to as far as Ghana to ferry products overseas. This should bother Osinbajo not the therapy of leaving naira to market forces.

The danger in this is that even the 2022 Appropriation Bill predicated on N410.15 per dollar would be imperiled. Nigeria is not South Korea, Singapore or any of the Asian nations with strong export fundamentals. Therefore, leaving the naira to market forces for a largely import-dependent economy like Nigeria is courting anarchy. A limited measure of control and cushioning which is what CBN is doing is needed.

Floating the naira will mean an instant jump in the prices of all essential commodities including fuel. Nigerians are already in great pain from outrageous prices of consumer goods (let’s not even talk of luxury goods), they can’t afford any further tightening of the noose around their neck.

Devaluation or floating the naira may give temporary relief to the naira but it is not a sustainable antidote to its woes. What will shore up the value of the naira is a productive economy; a robust primary sector where manufacture of goods is given premium attention. The CBN has scored a Bull’s eye in agriculture with the Anchor Borrowers’ programme. This is made possible because farmers were able to organize and peer-review themselves to deploy all borrowed money to the business of farming.  Other sectors should follow suit. We have seen cases where supposed manufacturers source forex from CBN to bring in machinery but turn around to use same forex to import rice, textiles etc. These are the forces that haunt the naira, not the CBN. So far, Emefiele has shown courage to stand up against the forex crooks, But, he cannot do it alone. He needs the support of Osinbajo and others to make a success of his bold initiatives.