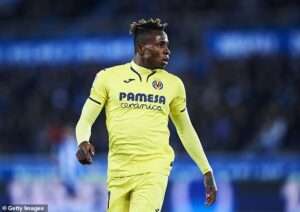 Premier League giants Chelsea are reportedly stepping up their pursuit of wingers in the transfer market this summer and have identified Samuel Chukwueze as a potential target if they fail in a bid to land Jadon Sancho.

The MailOnline reports that Sancho has emerged as a star for Borussia Dortmund and England this season, but the Blues face stiff competition from the likes of Manchester United for the 20-year-old who has been rated at £90million.

Should a pursuit for the forward fall through then focus is set to shift to Chukwueze according to Goal.

The 21-year-old has already emerged as a key player for Villarreal after breaking into the side during the 2018-19 season and has 12 goals and seven assists from 68 appearances.

The winger is also a Nigerian international and has earned 13 caps, scoring twice in that time for the Super Eagles.

Chukwueze was a target for Liverpool last summer but Jurgen Klopp’s interest appears to have cooled since then with the Reds on their way to the Premier League title.

Although he is under contract at the Spanish side until 2023, he represents a much cheaper option than Sancho and could be available for around £45million according to the report.

That might be enough for Chelsea to consider making a move ahead of a summer where at least a couple of their attacking options on the wing could be set to depart Stamford Bridge.

Willian is out of contract at the end of June and looks no closer to extending his stay at the Blues where he has featured since 2013.

Pedro could also be on the move in the summer, with the 32-year-old admitting he is uncertain where he will lining up next season having fallen out of favour under Frank Lampard.