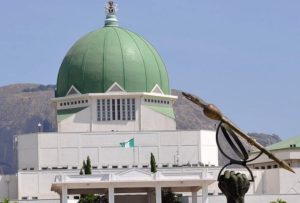 The Nigeria public service is a theatre of the serio-comic, of absurdities. Most of the institutions are never the fancy of the people. Two key institutions, the National Assembly, NASS, and the Independent National Electoral Commission, INEC, came under public radar recently. Both are notorious in peculiar ways.

NASS and INEC have been known to work against the Nigerian people. They’ve been enmeshed in sordid bribery tales. Draped in scarlet of scandals. They are, in many ways, the mortifying motif of all that’s wrong with the Nigerian public space. And as it has turned out over the years, they’re not ashamed to wear their badge of ignominy with criminal boldness.

So, when the debate on Electoral Act Amendment Bill hit a crescendo, NASS and INEC did not disappoint. NASS, the hotbed of sleaze and skulduggery, in an open show of shameless boldness toed the path to perdition.  A critical component of that debate was whether results of elections should be electronically transmitted to INEC central server after the results had been manually collated at the polling unit. Under normal circumstances, there ought not to have arisen any debate on this matter. Smaller African countries have embraced electronic transmission of election results. It’s not rocket science. Just a simple infusion of technology into the electoral process to make for transparency, fairness and credibility of the process.

On this matter, you would expect INEC to emphatically tell NASS and Nigerians that electronic transmission of result is attainable, achievable and in fact, inevitable. Instead, INEC curiously relapsed into a silent mode. The indifference of INEC at the early stage of the debate created a leeway for members of the National Assembly to dodge the bullet from a gun they shot at the nation. INEC paved the path for NASS to mock Nigerians. They voted against electronic transmission of results. That was a swim against the tide. The people’s representatives have turned against the people.

The Senate, in particular, was even showier in the show of shame. A good 28 of its members stayed away from their duty post. Let it be known that the primary duty of the NASS members is to make laws for the good governance of the people. Oversight function and other allied duties are only adjuncts of the processes of legislation. It’s therefore a clear case of dereliction of duty for the 28 senators to shun the sitting of that auspicious day. Their absence created an easy pass for their colleagues to openly vote against Nigerians. But there was yet another strand of illogic in the action of the senate. Like a drowning man would clutch at any reed, even a broken reed, the senators conscripted a completely extraneous agency to give legitimacy to their devious plot against the people. The Nigerian Communications Commission, NCC, was that agency. Some senators used the NCC as alibi to cover their shame. But Nigerians have refused to buy their plot. First, while NCC is the telecoms regulator for the country, it has no place in the constitution for the conduct of elections. It should not therefore be dragged into the e-transmission of results quagmire especially since INEC, a body that should know and knows (based on its inter-agency liaison with NCC), has affirmed again and again that it can achieve e-transmission of election results based on existing infrastructure and putting into context the format it has designed the results to be transmitted.

The House of Representatives, obviously unwilling to take full responsibility for its action, on July 15, invited the NCC to appear the next day (July 16, 2021) to testify on the feasibility of e-transmission of election results. The notice of invitation was short. Some say an act of mischief. But as a law-abiding corporate citizen, NCC responded to the invitation as scheduled and made a presentation based on 2018 statistics of the national spread and coverage of the network operators.

NCC told the House that based on 2018 data, less than 50% of the country enjoys 3G Internet coverage. It said the data sufficed for 2018 when NCC carried out a survey of 109,000 polling units out of 119,000 polling units. The surveyed polling unit areas were covered mostly by the 3G and 2G networks, which represents about 50.3% of the entire country. It did not matter to the House when the NCC said categorically that the report being presented on July 16, 2021 was based on data collated and submitted by network operators in 2018. It did not matter to the House that between 2018 and 2021, more places have been covered; that INEC has created more polling units; that telecom operators have ridden on the back of the growing broadband penetration to improve their networks.

Truly, a lot has changed between 2018 and 2021 and a lot more will change from now till 2023. Therefore, the House should not rely on data generated over two years ago in a rapidly dynamic sector like telecom. Instead, the House should listen to INEC, the body charged with the responsibility of all the processes of election in Nigeria. INEC is working with what is in 2021 and what will be in 2023; NASS is stuck with what was in 2018. There’s a difference.

Section 78 of the Constitution is unambiguous when it stated that ‘the registration of voters and the conduct of elections shall be subject to the direction and supervision of the Independent National Electoral Commission’. Therefore when the same INEC in 2021 assures Nigerians that electronic transmission of results is possible, achievable and feasible, the House should listen to INEC rather than ambushing the NCC and relying on outdated data to arrive at its conclusion.

Nigerians desire e-transmission of election results in all elections but members of the NASS, those who claim they represent the people want otherwise for their own selfish interest. It should be clear to all who to hold responsible if election results are not transmitted electronically in future elections. It’s the NASS members, not NCC. Coercing the NCC to intrude into the electoral process has no backing of the constitution. INEC is recognised by the constitution as the body responsible for the processes and methodologies for election. And the same INEC has told Nigerians that based on the type of data and the format it wants to deploy for the transmission of the same results, that there is no cause for worry. INEC says INEC can handle e-transmission of results: This suffices and should be respected by NASS. Any attempt to recruit NCC into the debacle is a subterfuge, a convenient alibi by the unpatriotic lawmakers to pass the buck just to have their way. And their way, unfortunately, is the primitive way to keep our electoral process opaque and prone to dubious manipulations.

This 9th Assembly is unpatriotic and self-serving and Nigerians should hold them responsible if anything goes wrong with the national elections. But above all, INEC should stand its ground and refuse to be intimidated by NASS members many of whom are intent on keeping the electoral process as messy and muddy as possible which is the only way they can rig their way back to the hallowed chambers.