The Federal Government through the  Central Bank of Nigeria’ (CBN) Anchor Borrowers’ Programme (ABP) has commenced sale of 200,000 metric tonnes of paddy rice to 18 Nigerian millers. 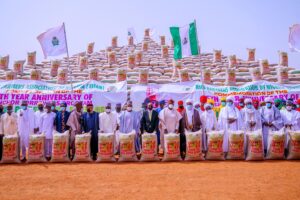 Emefiele and other dignitaries pose with bags of rice in Kebbi to mark the 5th anniversary of the ABP.

The CBN Governor, Mr Godwin Emefiele, made this known at the 5th year anniversary of ABP at Birnin Kebbi on Tuesday even as he listed gains of the programme over the last five years.

“Just as we have given the money to farmers for the Anchor Borrowers’ Programme, we will be disbursing the paddy aggregation loans to those millers.

“This is in order to use the loan to pay the farmers so that the farmers can repay their loans,” Emefiele said.

He said that the CBN had financed 2,923,937 small holder farmers cultivating 3,647,643 hectares of land across 21 commodities through about 33 participating financial institutions in the country.

Emefiele said the experience of 2015 to date had led to significant improvement in the execution of the programme.

He said that the bank had added several layers of control to improve on transparency and accountability among stakeholders.

“Today is a demonstration of the growth that had been attained in the agricultural sphere.

“It is important to note that, we are still far from attaining perfection but the emerging result from the programme reaffirms our belief in the potentials inherent in our agricultural sector.

“Farming will become a profitable venture in Nigeria as all farmers, because of the guaranteed off-take of their produce,  are smiling to the banks.

“Under the 2020 wet season CBN and Rice Farmers Association of Nigeria (RIFAN) partnership, we financed 221,450 farmers for the cultivation of 221,450 hectares in 32 states of the country.

“Repayment of loan is crucial to the sustainability of the programme.

“In support of the growth recorded in this drive to attain self – sufficiency in food production and to moderate prices of agricultural commodities, President Muhammadu Buhari has approved the resuscitation of Nigeria’s commodity exchange.

“And the CBN in partnership with other stakeholders, will be committing  at least, N50 billion to this initiative,” Emefiele explained.

He expressed the bank’s  commitment to finance one million hectares of rice farms in the present dry season farming with the plan of exploring two cycles of production with the season.

In his remarks, Gov. Atiku Bagudu expressed optimism that the farmers would take the country out of her tough economic challenges.

Bagudu commended President Buhari for his magnanimous support to all states in the country  to ensure that economic activities were kept functional.

The President of Benin Republic, Mr Patrice Talon was represented by his Minister of Foreign Affairs, Mr Aurelie Agbenonci at the occasion.

Talon said that a team of about four ministers was in the state to witness the celebration of successes by the state in particular and the country at large.

“We have seen it all and we are going to establish a partnership in milling and produce rice together to feed the whole West African sub- region,” he said.

Earlier, the National President of RIFAN  Alhaji Aminu Goronyo, commended President  Buhari for his commitment to food security and visionary ideas for the initiation of the programme five years ago.

Those in attendance at the event included the Sultan of Sokoto, Sa’ad Abubakar III and former Senate President, Ken Nnamani.

WHO predicts Covid-19 pandemic may extend beyond ...