You need to clean up the industry. So there is a challenge for you especially in making regulations that will check the trend of fake news 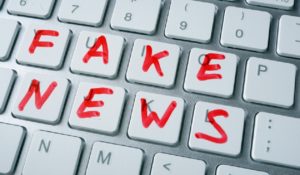 Gov. AbdulRahman AbdulRazaq of Kwara on Friday joined media executives to call for urgent actions to halt the spread of fake news, saying the earlier the menace is tackled the better for peace and security of the country.

The governor spoke in Ilorin at a lecture organised to celebrate the 60th birthday anniversary of Oloriewe Raheem Adedoyin, a media giant and chieftain of the ruling All Progressives Congress in the state.

“Yesterday (during a courtesy visit to my office), I mentioned to the leaders of the media community who are also seated here a need to frontally tackle fake news and quackery from within the media industry.

“It is in the interest of our country and our own sanity to do so,” AbdulRazaq said, referring to his pre-lecture meeting with some media chiefs that included the International Press Institute Chairman in Nigeria, Malam Kabir Yusuf; the Guild of Editors’ President Malam Mustapha Isah; veteran journalist and author Richard Akinnola, as well as Adedoyin.

The governor suggested that the media professionals may be the best suited to regulate the industry themselves, especially with the advent of the social media and proliferation of news platforms with scanty regard for professional ethics and consideration for national security.

“Leaders in the media industry, politicians and government are concerned about the issue of fake news.

“Today, anybody can wake up and set up a news agency online unregulated and guided.

“You should not leave it to politicians to regulate it because you understand the industry better,” AbdulRazaq had told delegation of the Newspaper Proprietors Association of Nigeria (NPAN), led by its president and IPI Chief Kabir Yusuf.

He said the trend of fake news is very alarming and constitutes a threat to peace and cohesion in the country, agitating for legislations driven by professionals themselves to check the menace.

“Anytime I see news online, I will first go to major newspapers and if it is not there, I will move away.

“Now, we should go beyond that because there is a lot of slanderous, unprofessional reports trending online.

“You need to clean up the industry. So there is a challenge for you especially in making regulations that will check the trend of fake news,” he said.

Dapo Olorunyomi, publisher of an online newspaper who delivered the Raheem Adedoyin lecture, spoke on the same issue.

He said the media, which plays essential roles in strengthening democratic rule and accelerating national development, must not be left unguarded from saboteurs and the challenge of disinformation.

He spoke on “Free Press, Focus of Democracy and Future of Nigeria”.

“Fake news is a menace prompted by technological advancement and can only be defeated intellectually,” Olorunyomi said.

“Fake news problem is a technology problem. And any policy to be formulated to solve it must be knowledge-based,” he submitted.

He argued that no society where democracy is the choice of government can ever succeed without responsible media, tasking all decision-making organs to rise against the menace of fake news before it goes out of hand.

He said the media industry has been facing an information crisis since the take-off of digital transition in 1996, whereby everyone fabricates stories, not minding its implications on the peace and unity of the society.

Yusuf, the NPAN chief, stressed a need for media practitioners to substantially design a framework to address the problem of bad eggs in the industry.

He called on Nigerian leaders to assist the media to develop self-regulatory framework, maintaining that self regulation is the best way to address the problem of fake news.

Meanwhile, AbdulRazaq has urged Nigerians to bury their differences and work for national unity and development.

“The coming together of the rainbow audience in this hall should teach us a few things about our country.

“I call it a rainbow audience because we have people with varying political beliefs and ethnic backgrounds coming together to celebrate our friend, Oloriewe. That should be our approach to Nigeria. We must find that unity in diversity.

“Irrespective of our tongues or where we face in prayers or our grievances, we must pull ourselves together and build a stronger Nigeria. It is the only country we have,” the Governor said.

The Pro-Chancellor, Kwara State University, Malete, Dr Adewumi Thomas, said he learnt a lot from Raheem Adedoyin despite the fact that he is older than him as his life is based on love and progress.

“Oloriewe Raheem Adedoyin is a politician of substance. He teaches lessons of humility and genuine love, and I appreciate the way he relates with people and I want him to sustain the good work,” he said.(NAN)