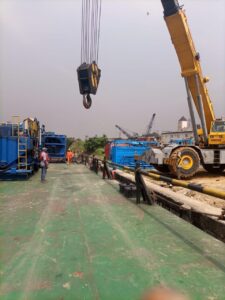 Ayadi said that the President’s prompt dispatch of Timipre Sylva, Minister of State for Petroleum to the spill site had sent signal of hope to the fishermen.

He noted that the fishermen vocation had been threatened by the spill.

The oil spill was reported from Oil Mining Lease (OML) 29 operated by Aiteo Eastern Exploration and Production on Nov. 5.

It has been spewing crude oil into the Santa Barbra River and Nembe creeks till date.

Ayadi noted said that the empathy shown by the visit speaks volumes.

He said that Sylva’s visit on the directive of the President was an encouragement to impacted residents, who were predominantly fishermen.

The coordinator also noted that the visit must have sent signals to the oil firm which operates the field that it would not be business as usual.

He said that this had resulted in renewed approach by the firm to recover the crude and restrain it from spreading.

“Hitherto what the oil firms do is to use chemical dispersants which in itself is toxic to marine life to mop up the oil and further degrade the environment, but the current approach of intensive recovery of spilled oil is very acceptable and better.

“From what we have seen by observing the response by Aiteo which we understand is a Nigerian company which acquired the asset following Shell’s divestment in 2015, it means that we have the capabilities to do things well.

“Even though this was an emergency, in very little time many oil companies came together to help out and the oil firm has retained the services of Boots and Coot, a Halliburton company to assist in stopping the well leakage.

“This type of coordinated efforts by a Nigerian oil company is very patriotic and should be emulated by even the international oil companies operating in Nigeria.

“We have not witnessed this magnitude of response even in worse incidents in the past,’’ Ayadi said.(NAN)