“Over the past five years, the gully erosion, which is over 20 feet deep, swallowed over 15 buildings and rendered hundreds of families homeless.’’

Some communities in parts of the South-South zone of Nigeria have decried the perennial economic and human loses arising through the devastating effects of gully erosion in their areas. 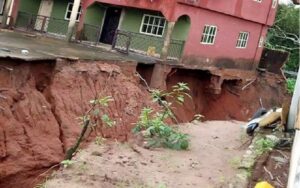 A building haunted by gully erosion in Delta

Members of the communities who made their views known also blamed poor road infrastructure for erosion menace in their areas.

A youth leader in Adonte, Mr. Chucks Okpunor, said that gully erosion, caused by the depletion of natural elements, had cut off the community from its neighbours and destroyed farmlands.

“Over the years, Adonte people have suffered hardship, resulting in economic and human losses due to the menace of soil and gully erosion.

“We have lost human lives, homes, farmlands to the menace. Each rainy season comes with tales of pains and agony for the villagers because access to our community is denied.

“Two years ago to be precise, about 10 farmers in the community lost their agricultural produce after erosion tore through farmlands, destroying cassavas and yams.

“Also, in 2016, after a heavy rain, three houses in the community were washed away overnight by gully erosion leaving an elderly man dead and many families homeless,’’ Okpunor said.

In Ukwu-Nzu, the story is the same, as villagers gripped by erosion menace counted the human and agricultural losses they encountered.

A farmer, Mr. Joe Okwumbu, said that over the years, gully erosion had cut off major quarters from the rest of the community.

Okwumbu also said that gully erosion had created death traps, especially for strangers coming into the community at night.

“In Ukwu-Nzu, the depth of gully erosion had severed the only passable road from the middle, thereby cutting off Ogbe-Okwe village from other parts of the community.

“Over the past five years, the gully erosion, which is over 20 feet deep, swallowed over 15 buildings and rendered hundreds of families homeless,’’ he said.

According to Okwumbu, the situation has left the villagers handicapped as several efforts by successive governments to arrest the menace failed to yield result.

However, the present administration of Governor Ifeanyi Okowa in 2017, took a giant step to provide succour to the communities devastated by the erosion menace in the state.

This was done in collaboration with the World Bank and the Federal Government, to tackle the devastating effects of flood and gully erosion menace in five worst hit communities in the state.

According to the state government, the intervention of NEWMAP in the state is to ensure route and gully reclamation in some of the erosion-devastated communities.

The communities listed under the project include, Ukwu-Nzu and Obomkpa both in Aniocha North, Boji – Boji town in Ika North East, Ubulu-Uku in Aniocha South, and Jesse in the Ethiope West local government areas of the state.

The NEWMAP was designed to also check gully erosion and flood but almost four years after the project commenced in the areas, gully erosion sites still dot the communities.

In Ukwu-Nzu for instance, the villagers are presently appealing to the government for a speedy remediation of the erosion sites.

The paramount ruler of Ukwu-Nzu, Obi Christopher Ogoh 1, who recalled the losses and agony caused by gully erosion, said it had over the years, swallowed many houses in the community.

Christopher however, noted that the community heaved a sigh of relief when the World Bank team visited the site to ascertain the level of devastation.

He said the team later graded a side of the gully to gain access to one of the quarters of the community that the gully had previously cut off.

“After the grading of the gully, up till date, we have not seen them again. We don’t know what went wrong.

“It will worsen if the rains become intense. I am appealing to government and the World Bank team to expedite action to address the situation before rains increase,’’ Christopher warned.

Meanwhile, the state government had expressed disappointment over delays in the project.

The Commissioner for Environment, Mr. Christian Onogba, who stated that the delay in the projects had affected the five communities, added that the level of devastation had worsened.

“It is a big challenge. When I resumed office as the environment commissioner, one of the ongoing projects presented to me was the gully erosion sites.

“The Ukwu-Nzu, Obomkpa, Ubulu-Uku, Agbor and Jesse sites I inherited were a big challenge. I visited the World Bank team in Abuja.

“I told them to see the reason why we should take the project off the ground. They also considered that the sites were deteriorating.

“From what I saw as at the time I visited the sites, things have worsened. The level of devastation of the gully erosion in Agbor, Ukwu-Nzu and other areas is begging for urgent attention.

“After series of engagement with the World Bank, fortunately we got a no-objection to award that of Agbor site.

“That’s the extent we have already gone. The World Bank insisted that they needed us to get a supervisory firm in place. What we did was to get the firm that did the engineering design.

“Indeed, it has been over three years the programme was launched, yet the project has not taken off,’’ Onogba explained.

He also said that the state got engineering designs in other four gully sites but was awaiting the World Bank clearance to open the bid.

Onogba noted that the state government had paid its counterparts fund which was eventually used for engineering design and palliative among other things.

He said apart from the five communities in the NEWMAP programme, about 10 gully erosion sites needed urgent attention in Delta.

According to Onogba, the ecological fund domiciled with the Federal Government cannot be accessed by the state due to some bottlenecks.

A farmers’ group in Rivers attributed the menace of soil and gully erosions to poor road infrastructure in their areas.

The group, `Etche Cooperative Union’, said that the challenge of soil and gully erosions was due to poor road infrastructure.

According to Mr Godwin Akandu, president of the group, “gully erosion is a natural disaster that can’t be completely eliminated’’.

Akandu also said that impacts of the scourge could be reduced if the right environmental preservation principles were applied during road construction.

The farmer said that erosions, gullies were basically, the wearing away of the earth surface, adding that good road infrastructure was key to tackling the menace.

Akandu said that farmers in the state have not had any major crisis emanating from soil gullies or desertification on farmlands.

He said that flood was a major natural disaster affecting farmlands in the area while soil gullies and erosion were mostly visible on bad portions of roads, not on farmlands.

Akandu cited the deplorable Chokocho/Ngokpala road which traversed Rivers and Imo states, adding that the poor condition of the road made it difficult for farmers to transport farm produce to sales points.

“Farmers in the area had recorded unquantifiable losses during the 2020 harvest. It was a very sad experience for farmers in Etche Local Government Area who invested hugely in cassava.

“These farmers couldn’t access markets because the roads were so bad and were being overtaken by gullies.

“If a farmer records a bounteous harvest but couldn’t access markets, he is left with no option than reverse to the subsistent farming practice where he produces only for his household.

“I’m afraid this has resulted in high cost of staple foods especially cassava and other tuber crops.

“Like every other business, farmers get funds from loans, so loan repayment became very difficult as farmers were unable to distribute their produce to markets.

“In this year’s planting season, many famers could not afford farm inputs because most of them who borrowed to invest last year could not service their debt. This made it difficult for them to access loans,’’ he said.

Akandu also urged the Federal Government to come to the aid of residents of the area by considering immediate construction of the Chokocho/Ngokpala road at Rivers/Imo boundary to improve farming and livelihoods in the area. (NAN Special Report)