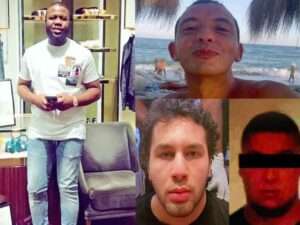 Dubai Police has one simple message for criminals like Hushpuppi – you can run but you can’t hide, at least not for long. In recent months, Dubai Police have caught several internationally wanted criminals including drug lords and mob bosses responsible for violent crimes. Here’s a lowdown on them.

Ridouan Taghi, the Dutch drug trafficker who ordered killings as if they were cups of coffee

Billed as “the Netherlands’ most dangerous man”, the Moroccan-born Dutch drug-trafficker was wanted in connection with a string of murders, including the assassination of a prosecution lawyer in the Netherlands. Investigators claimed he ordered the killings as if they were cups of coffee. Police teams from European countries were chasing Taghi for ten years. However, it took Dubai Police just five days to arrest the 41-year-old fugitive who had sneaked into the UAE using a fake identity. In fact, the mob boss was taken by surprise when a special unit of Dubai Police raided his luxury villa in December 2019. So much so that he expressed a grudging admiration for Dubai Police as he was being taken into custody. “Dubai Police must be the best in the world,” he told Brigadier Jamal Al Jallaf, Director of the Criminal Investigation Department.

Head of one of the most dangerous international crime rings, Danish gang lord Amir Mekky was a close associate of Ridouan Taghi. He was wanted for murder, drug trafficking and money laundering. In Europe, he evaded arrest for several years as he used multiple passports to travel. His reign of crime came to an end earlier this month when Dubai State Security nabbed him in a sting operation. Special forces from the State Security Service in Dubai monitored Mekky’s movements before raiding his residence around midnight on June 4 and taking him into custody. The entire operation was carried out despite movement restrictions during the coronavirus pandemic and in compliance with UAE law and international legal standards. Investigations revealed that Mekky had entered the UAE in November 2018 using a different passport.

Hushpuppi aka Raymond Abbas posed as a reputed businessman in Dubai and flaunted his extravagant lifestyle on Instagram where he has more than two million followers. But an investigation by Dubai Police revealed that the Nigerian celebrity was allegedly part of a gang that hacked corporate emails and routed huge amounts of money to bank accounts that they controlled. Hushpuppi was arrested along with his accomplice Olalekan Jacob Ponle, aka Woodberry, along with ten other men in June in a police operation called Fox Hunt 2. Besides Dh150 million in cash, police also seized 13 luxury cars, valued around Dh25 million, 21 computers and 47 smartphones during the raid, which involved six teams. A similar raid conducted as part of Operation Fox Hunt led to the arrest of nine fraudsters in February. They were accused of running 81 fake businesses across 18 countries.

Widely regarded as the mastermind of a drug-trafficking cartel, Nordin E.H is linked to several violent crimes in Belgium, according to European media. On the run from Belgium Police, the 32-year-old was holed up in Dubai from where he allegedly ordered a series of attacks against his rivals, including some using grenades and assault rifles in Antwerp. But investigators tracked him down and alerted Dubai Police, who wasted no time in putting the drug lord where he truly belonged – behind bars. The Antwerp court is set to request for his extradition.