Local News
Home›Local News›I’m not afraid, I can even sleep in Baga town, but I fear for my people – Zulum

I’m not afraid, I can even sleep in Baga town, but I fear for my people – Zulum 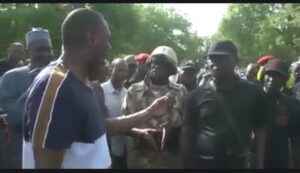 Gov Zulum rapping the soldiers after the attack

Governor Babagana Zulum of Borno State says he’s not afraid of insurgents and that he can even sleep in Baga town where his entourage was attacked Wednesday evening by some insurgents, but he’s concerned about residents of that town some of whom had abandoned their homes.

An angry Zulum said he was not happy with the Nigerian Army for not clearing the town of insurgents. His convoy was attacked recently by insurgents who exchanged firepower with members of the governor’s convoy.

He told the Army: “You have been here for over one year now, there are 1,181 soldiers and 75 officers here; if you cannot take over Baga which is less than 5 km from your base, then we should forget about Baga. I will inform the Chief of Army Staff to redeploy the men to other places that they can be useful.

“You people said there’s no Boko Haram here, then who attacked us?

The attack on the governor has attracted condemnation from Northern Governors Forum who described  the act as callous and reprehensible.

The Chairman of the forum and governor of Plateau, Simon Lalong, made the condemnation in a statement  by his Director of Press and Public Affairs, Dr Makut Macham.

He said the attack on the governor’s convoy on his way to Baga in Kukawa Local Government Area of the state was an act to frustrate his efforts in ensuring the well-being of the vulnerable in the state.

The governor expressed concern that Zulum was attacked while on the way to distribute palliatives to Internally Displaced Persons for the Sallah celebration.

Lalong said the incident was a desperate attempt by criminal elements to sabotage Zulum’s efforts toward reducing the sufferings of IDPs who had been traumatised by terrorists.

“This regrettable attack shows the desperation by enemies of peace and humanity at large to jeopardise all efforts towards making life easier for victims of violence in the state over the years.

” The Northern Governors Forum strongly condemns this attack and stands with Gov. Zulum who has demonstrated courage in personally reaching out to people in need despite the dangers.

” We urge him not to be deterred as he keeps working with security agencies to protect the lives and property of the people,”he said.

Kaduna is not the only State facing ...