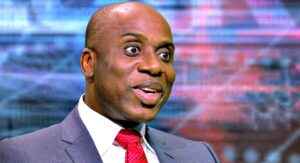 Amaechi justified Nigeria not asserting her sovereignty in the event she was unable to pay back the loan, stressing that without such clause it would be impossible for China to grant the loan because that is what China does everywhere, he explained to journalists.

Amaechi who was at the Idu Train Terminal recently also want the National Assembly to look away from the details of the $400 million China loan so that another commercial loan agreement signed between Nigeria and Export-Import Bank of China to the tune of 5.3 billion dollars for the Ibadan-Kano rail project would scale through.

He said: “First, I just got to know there is a clause in the $400 million loan agreement.  For example the loan to construct the rail between Ibadan and Kano is $5.3 billion (nearly N8 trillion). The implication is that if at the end of the day, we don’t pay China back the loan, whatever China needs to take to recover their loan they will take without Nigeria telling them about sovereignty. But most of the time what the Chinese do is that they go after the same asset that you refused to pay its loan. What’s wrong with that?

“We are asking for $5.3 billion loan and they say just waive your sovereignty. Don’t tell me that when I want to recover my money you will tell me that you are sovereign government. So how do I recover my money? If the National Assembly in their wisdom think that this is wrong then they should tell us how to get the money,” Amaechi said in strong defence of the Chinese and their action.

The House of Representatives had raised the alarm over clauses in Article 8(1) of the commercial loan agreement signed between Nigeria and Export-Import Bank of China, which allegedly concedes sovereignty of Nigeria to China (in case of default in payment) in the $400 million loan for the Nigeria National Information and Communication Technology (ICT) Infrastructure Backbone Phase II Project, signed in 2018.

The controversial clause in the agreement signed by Federal Ministry of Finance (Borrower) on behalf of Nigeria and the Export-Import Bank of China (Lender) on September 5, 2018, provides that: “The Borrower hereby irrevocably waives any immunity on the grounds of sovereign or otherwise for itself or its property in connection with any arbitration proceeding pursuant to Article 8(5), thereof with the enforcement of any arbitral award pursuant thereto, except for the military assets and diplomatic assets.”

Nigerians have roundly condemned the action of the Nigerian government officials who accepted the terms of the loan.

NAPTIP calls for more collaboration in the ...