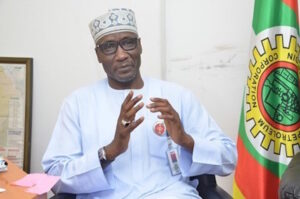 At NNPC, there’s a new culture of transparency

Banks are refusing to finance refining of fossil fuel

We have mobilised EPCs to fix our dead refineries

The Group Managing Director, GMD, of the Nigerian National Petroleum Corporation, NNPC, Mr. Mele Kolo Kyari, recently wowed a gathering of over 200 Nigerian editors, representatives of security agencies, heads of parastatals among others at the All Nigeria Editors’ Conference (ANEC).

ANEC is the flagship annual conference of the Nigerian Guild of Editors. This year’s edition held in Abuja from October 21 to 22.

Kyari who was Special Guest of Honour showed a good grasp of the malaise that has afflicted the Nigerian oil and gas industry. He, however, raised a banner of hope that under his watch, things are now done differently.

Kyari, who spoke off the cuff on the subject, “Insecurity as it affects the Oil and Gas sector”, said that all the troubles that have weighed down the sector in the past are elitist in nature.

According to him, issues of refineries not working, crude oil theft, among others, are all traceable to the Nigerian elite which include the editors and everyone present at the event.

He explained that every artisanal oil thief or illegal bunkerer is representing a elite or group of elites. He said that refineries had become comatose because the leadership elite had been doing things the wrong way over the years by relying on the builders of the refineries to come to Nigeria to fix the refineries. This model, he explained, does not happen anywhere because there are specialists whose business is to fix such refineries. They are not the builders but their job is to fix them when they break down. He called such companies EPCs (Engineering, Procurement and Construction).

He gave an analogy: “You cannot ask Toyota to come down to Nigeria to fix your Toyota car. You give it to a technician. This is the error we have been repeating over the years.

“Worst of it all is that banks are refusing to finance refining of fossil fuel. We need an energy advocacy in this regard. And I charge editors to lead in this matter by advocating that banks show more interest in financing refining of fossil fuel. We may not be able to build new refineries, develop the gas sector because banks are refusing to finance our vision for energy security.”

Kyari said there is direct link between energy security to the insecurity in the land, stressing that NNPC was keen on changing the narrative and getting the refineries back on stream. He lauded President Muhammadu Buhari for giving his management the free hand to do the right thing, adding, “this is the first time in history that NNPC and its subsidiaries are allowed to do things the way things should be done.

“Now, I can confirm to you that we have taken responsibility and we will fix the refineries. We have started the process, contractors have been mobilised to the Port Harcourt refinery, while the same process for Warri and Kaduna refineries will be concluded by the end of this year,” he said.

He called for the support of the Guild and other stakeholders towards reducing insecurity within the oil and gas industry.

Below are excerpts from his remarks:

“For us, it is a very tall task and the reason is very simple, because like you all know, today we’re energy deficient. We import all our petroleum products; power is being supported to ensure that we have sufficient power in our country.

“We know that we’re very far away from the jurisdictions that are advocating for energy transition so that we can walk away from fossil fuel. The only resource that we have that is cheap and close to us, is gas and we don’t develop it. We are nowhere near the attainment of zero carbon emission by 2050, and indeed by implication this is deepening poverty and also insecurity which the theme of this conference is trying to address.

“In my view, there must be energy justice, which means that countries should move in the pace that they can with the realities that they face, so that they can transit on the basis of their contribution to the carbon emission which we all know that we’re low and ultimately there will be justice for all by 2050, so that as we transit, we’re allowed to develop in our pace in a manner that is just.  I know this is the proposal of our government during the next COP conference, where considerations will be made around what countries can do specifically to reduce their carbon emission. We’re not averse to this as a country, but we’re just nowhere near the conversation, and therefore for all of you and all of us, the energy security has wider implication today that we have to contain with the reality of energy transition, which can actually take away some of the resources that we see today.

“You will not find financing for some of your projects as we’re already facing, banks are refusing to fund fossil fuel-based energy projects and the implication is that, even if you have fuel, it could not even be helpful as you’ll not be able to put it on the table because you lack the resources to finance them so that you can put them on the table. That’s one area of advocacy that I’ll frankly suggest to the media and particularly sub-Saharan countries to promote: that there must be energy justice – that we agree on transition, but it must come with justice.

“Except we promote this, we’ll not even have money to fix the refineries.  I can confirm to you that we have financing for these refineries but we may not be able to do new ones and even engage in new gas projects. Unless we all admit and accept this, then we’re really heading for much deeper energy crisis.  We all want gas and that can come probably as early as 5-10 years and then we’ll have no way to resolve this issue, and I think it’s one thing that the Guild of Editors should promote.

“As we speak today enormous work is being done by the relevant security agencies, and I must commend the Chief of Defence Staff for every support that they’ve been giving to us. There’s significant improvement in the containment of acts of vandals on our pipelines and our facilities.

“We have also seen significant growth in our production because of this. Having said this, it does not eliminate the fact that we have issues around our assets and facilities. We have a facility called the Atlas Cove reception port, where imported petroleum products are received, pumped to Mosimi through to Ibadan and all the way to Ilorin.

“That pipeline today is active. We’re pumping petroleum products, and until the intervention I’ve just mentioned, we used to lose up to 20 per cent of the volume from that line, without the security.

I have said this at many fora that, many of the residents in communities you see around the areas where we have these pipelines are essentially communities of thieves, with all due respect. We have seen incidences of fire where there should be none; and to our disappointment, even in religious houses, we have found jerrycans of stolen petroleum products.

“Today, I can also confirm to you that because of the interventions that we’ve commenced with the relevant security agencies, in the last one year, we’ve found that the stealing fell from 20 per cent to 4per cent. But when you say 4 per cent of 10 million litres that passes through the line every day, it is still very significant.

“So much work still needs to be done so that we can close that gap to a tolerance level of 0.5 percent which is what the industry accepts as a normal loss. This is also true of our crude oil pipelines. Today, the losses are so huge that we’re now moving forward with an alternative plan to ensure that we can secure our asset.

“It is not the ordinary man on the street that steals it, but the elites of the society and it needs all of us to fight them which will be survival for us all. Beyond this, because of the nature of our operations in the oil and gas industry, we have our facilities all over the country, more so in the Niger Delta region.

“There’s no state in the country that you’ll not find an oil worker who is essential in the distribution and supply of petroleum products, and they too are targets of insecurity as we have a number of them that have been kidnapped and ransoms paid. It is a problem for us all, but more importantly, I believe all we need to do is to be more inclusive, not in terms of people getting jobs, but in the things that we do, we must include the ordinary people, the man on the street.

“This is my goal: to extend the benefits of the oil and gas sector to ordinary Nigerians.”