Local News
Home›Local News›When a leader values one tribe over another, there’s bound to be disunity – Jonathan

When a leader values one tribe over another, there’s bound to be disunity – Jonathan 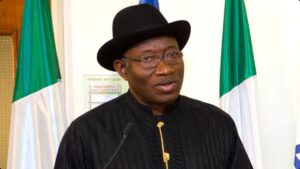 Former President Goodluck Jonathan, has urged Nigerian leaders to value the interest of every section of the country in order to build a united nation devoid of agitation, disunity and disenchantment, stressing that when a leader values one tribe over another, there’s bound to be disunity.

Jonathan spoke when he led members of the 1981 set of the University of Port Harcourt alumni Association on Saturday, to the king of Opume kingdom in Ogbia Local Government Area of Bayelsa, King Amalate Turner.

Jonathan described the country as blessed with both human and natural endowments which can only be enjoyed in a peaceful atmosphere.

He urged leaders to focus more on building a united nation where no one society or tribe should be more valued than the other.

“If leaders derail, then there is bound to be disunity and disenchantment from those who feel not being accorded their rightful respect and value,” he said.

Jonathan, who is an alumnus and a member of the pioneer graduate class of 1981 of the University of Port Harcourt, said the reunion programme is part of activities of the alumni aimed at fostering bond  among old classmates.

He said it’s also a platform to deliberate on issues affecting their alma mater and give back to the school and society in general.

On his part, King Turner said it is a good thing to reunite his classmates after 40 years of separation. (NAN)

Power has changed hands in the media ...