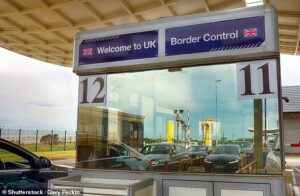 Nigeria, Ghana and Albania top of the list of countries with the highest number of deportees from Britain and it’s costing the UK government humungous amount of tax payers’ money to keep the pace. More than three-quarters of the deportation flights, usually chartered flights,  went to Albania, Pakistan, Nigeria and Ghana, according to new findings from the UK Home Office.

Guards outnumber passengers by up to eight to one on deportation flights that send crooks and illegal immigrants out of Britain, reports the MailOnline.

Home Office figures show the proportion of taxpayer-funded staff to deportees on chartered flights has been rising since 2016, in part because more deportees are becoming increasingly disruptive, requiring extra staff to handle them.

In the past four years, 5,304 foreigners – most of them convicted criminals who have finished jail terms – have been deported on 151 flights from the UK.

It can take eight guards to escort just one prisoner during a deportation flight from Britain, according to

They have been accompanied by 12,677 taxpayer-funded staff – the equivalent of 2.4 for every deportee. More than three-quarters of the flights went to Albania, Pakistan, Nigeria and Ghana.

In 2016, there were on average twice as many contractors, medical staff and Home Office officials as deportees on flights that year.

By 2019, this had risen to more than three for each foreign national and in the period up to April this year, it was on average more than four.

And for some individual flights, it was even higher. A chartered aircraft to France on January 30 this year, for example, had 33 staff overseeing the deportation of four people.

A flight the previous day to Nigeria and Ghana involved 45 staff for seven returnees.

Lucy Moreton, of the Immigration Services Union, said: ‘It’s become more common for foreign nationals to seek to disrupt a standard removal flight. It used to be possible to put someone on a flight without an escort.

‘The more it gets reported that [the disruption has] happened successfully, it spreads. A few years ago [deportees] used to just shout, then they took to taking their clothes off.

‘The number of staff depends on the nature of the flight and the individuals. It’s risk-assessed depending on who you’ve got going.’

The Government estimates it will spend £200 million on deportation tickets and charter flights between 2017 and 2024.

Earlier this year, it emerged that the cost of four charter flights to send deportees to Germany, France, Switzerland and Kosovo in 2019 was £443,089 – almost £12,000 for each of the 37 people being kicked out of the UK.

About 12,000 migrants are forcibly removed from the UK each year, with a further 20,000 leaving voluntarily.

Last night, a spokesman for the Home Office said: ‘We make no apology for seeking to remove dangerous foreign criminals and immigration offenders, making enforced returns by both charter flights and regular scheduled services.

‘A decision on the number of escorts used for any removal will be based on factors including whether we expect violence or disruption during the escort operation and on the flight itself.’