Okowa makes grand entry into Asaba, sure of victory in 2023 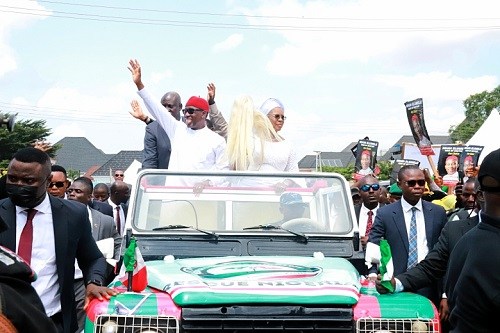 Okowa makes grand entry into Asaba, sure of victory in 2023

Gov. Ifeanyi Okowa of Delta and the Peoples Democratic Party (PDP) Vice Presidential candidate  made a grand entry into Asaba on Thursday since he was picked as Atiku Abubakar’s running mate with a declaration: “Only the PDP will defeat the All Progressives Congress in 2023 general elections.”

Okowa said this while addressing the people of Delta and party faithful who turned out en masse to receive him at the Grand Reception organised by the State PDP in Asaba.

The governor, who appreciated God and thanked  Nigerians for his elevation and support, said he was grateful to the party’s Presidential standard bearer, Atiku Abubakar, and the National Chairman, Iyorchia Ayu, for selecting and nominating him as the vice presidential candidate.

According to Okowa, the Atiku/Okowa joint ticket is for victory, hope and the only ticket that will rescue power from the APC led government come 2023.

He said that the nation needed to pray, be resilient and be hopeful, adding that the process of rebuilding the country and giving hope to the youth, women and indeed to Nigerians has begun.

Okowa advised youths not to be carried away by the euphoria of the time but remain committed to work with PDP for the positive change that would come.

He said that he had in the past seven years, with the support of youths, built Delta State, adding that this would be replicated in the national level should the party emerge winner.

The governor said that the PDP-led government, if returned to power, would tackle insecurity, create jobs and rebuild the economy and ensure that education remained key to end these incessant strikes in federal universities and other institutions.

“Atiku has been talking on the need to restructure the country and the need to engage the private sector to provide opportunities for the youth and women.

“We want to assure the private sector that a new hope is coming and we shall tackle the issues of insecurity by providing jobs for the youth.

“We cannot do this alone but with the support of the women and youths; we shall bring back Nigeria among respected nations in the world.

” So, I urge all of you to go out there to register and collect your Permanent Voter’s Cards and by the grace of God we will win in 2023,” Okowa said.

The Deputy Minority Leader, House of Representatives, Mr Ndudi Elumelu, the Ohanaeze Ndigbo Youths and that of the Women wings, led by Mr Okonna Nwike and Rita Daniels among other groups, gave their support for the Atiku/Okowa joint ticket.

Gov. Okowa was accompanied home by the PDP National Chairman, Iyorchia Ayu and  members of the party’s working committee.

Also, the state Deputy Governor, Mr Kingsley Otuaro, the state party Chairman, Mr Kingsley Esiso,  traditional rulers, clergymen, party faithful and gospel singers, were on ground to receive Okowa in a worship and praise to God for the governor.(NAN)