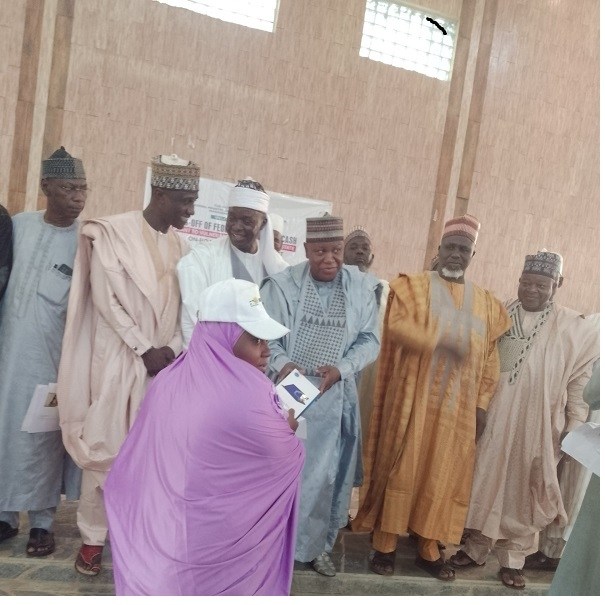 Minister of Humanitarian Affairs, Disaster Management and Social Development, Hajiya Sadiya Farouk, disclosed this while inaugurating the disbursement of Cash Grant to Vulnerable Groups (GVG) on Tuesday in Sokoto.

Farouk, represented by the National Coordinator of NSIP, Dr Umar Bindir, said the figures were being expended on different categories of empowerments targeted at enhancing the livelihoods of Nigerians.

According to her, Federal Government under the leadership of President Muhammad Buhari, designed effective schemes to give a lifting hand to some of our poorest and vulnerable citizens in our country.

” Programmes were being implemented in close partnerships with the State Governments and the effort is a clear demonstration of our collective commitment to address poverty which is the core developmental challenge confronting us as a people.

She said on the inception of President Buhari’s Administration in 2015, it inherited a National Poverty Incidence level averaging 70 per cent, according to National Bureau of Statistics (NBS).

She said since then, the Federal Government had paid more attention to generating solutions to address the plight of the poor and vulnerable in the country.

” Despite other economic challenges the Administration inherited at the time, this informed the decision to initiate the National Social Investment Programme (NSIP) in 2015.

” This as a strategy for poverty reduction and enhancing social inclusion among our people, especially the women in rural areas, ” the minister said.

The minister added that since the commencement of NSIP in 2016, it had impacted positively on many lives of the poor and vulnerable in Nigeria.

” I have personally witnessed the life-changing experiences on people who, hitherto, lived below the poverty line and those that are vulnerable to shocks, but are now living better lives.

” It is consistent with President Buhari’s deliberate National agenda of lifting 100 million Nigerians out of poverty in 10 years. ”

She noted that GVG was designed to provide a one-off grant, a cash grant of N20,000 to some of the poorest and most vulnerable Nigerians in rural and semi-urban areas across the 36 states of the federation and the Federal Capital Territory,

Farouk added that there were no fewer than 5,815 GVG beneficiaries from the 23 local government areas of Sokoto state.

She stressed that the figure was the highest slot in the country because statistics showed that the highest poverty incidence was actually in the state.

The minister also distributed engagement letters to Independent Monitors of the schemes and started the Digitised Cash Transfer Payment system for the Conditional Cash Transfer Programme.

She noted that the import of the exercise was to create room for reliable, transparent and accessible database for seamless disbursements.

The State Focal Person, Alhaji Musa Girki, said 70 per cent of GVG beneficiaries were women, while the remaining 30 per cent were youths, based on presidential directives.

Girki said 15 per cent of the total number of beneficiaries were specifically allocated to citizens with special needs, including Persons With Disability (PWDs) and Senior Citizens in the sate.

Gov Aminu Tambuwal said the target of the Cash Grant project was to increase income and productive assets of the target beneficiaries.

Tambuwal, who was represented by the Commissioner for Animal Health, Prof. Abdulkadir Junaid, said it was highly expected that the beneficiaries would use  the grant to improve their productivity, create wealth, generate employment and improve their living standard.

He noted that cash grants to vulnerable groups and Conditional Cash Transfer were good strategies to address poverty and provide social safety nets for vulnerable individuals and households.

Tambuwal reiterated that his administration would continue to enter into strategic partnerships that would provide succor to the less-privilege in the state, to move them to prosperity.

A cross section of the beneficiaries expressed happiness over the gesture and promised to make wise investments to support their families’ living conditions. (NAN)