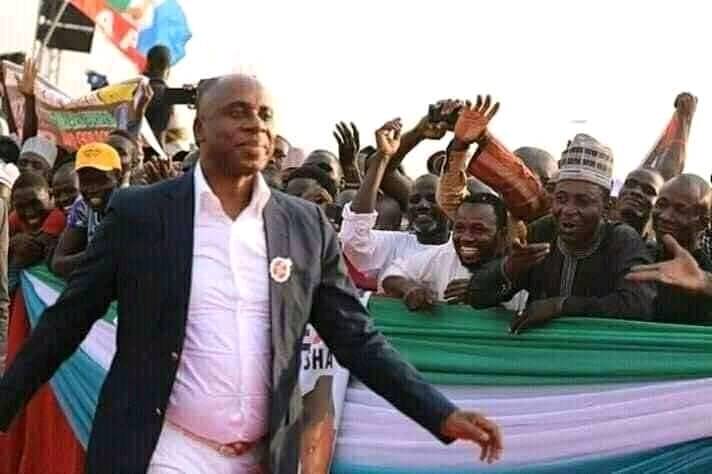 Supporters of Minister of Transportation, Mr Rotimi Chibuike Amaechi, who on Saturday declared his interest to run for the office of President of Nigeria, on the platform of the All Progressives Congress (APC) have insisted he is the right man for the job.

At a thanksgiving service organised by the Rivers chapter of APC at the Adokiye Amiesimaka Stadium in Port Harcourt, his supporters chronicled many reasons why Amaechi is the fit and proper person to succeed President Buhari.

The qualities include: “ He understands the basics of governance having garnered experience spanning over 20 years in the legislature and executive at both state and national level.

“He is healthy and not one of those politicians who regularly abandon their duty post to go for medical abroad.

“Amaechi is a detribalized Nigerian whose influence spreads across the nation, from north to south.

“He is not desperate to lead Nigeria as a political trophy or personal lifetime ambition but a moral burden to serve his country.

“He was born post-Independence and falls within the age bracket being advocated by progressive Nigerians.

“He has a track record of competence and capacity which he deployed to transform the transport sector and Rivers State when he was governor.”

While declaring for the 2023 Presidency, Amaechi stated that his interest to run for the Presidency was not to fulfill a life time ambition but a moral burden on his years of public service.

“I stand before you today to declare my intention and submit my application to serve as your next President.

“I did not come to this decision lightly. I have served our nation for the last seven years as Minister of Transportation.

According to Amaechi, the 23 years of service has equipped him not only with great experience in governance and public service but also compassion for the ordinary citizens of our dear country.

“After more than two decades in the public arena, I had wanted to go on holiday and spend more time with my family before charting a new course outside politics.

“But at 56 and a member of the generation born after independence who has seen the good, the bad and the ugly of Nigeria, I am compelled by the urgency of our present challenges to place my experience and proven capacity at the service of the nation at the highest level,” he added.

The minister said that those who knew him could testify that he had always been a straight talker.

“This trait has not always made me popular, but I speak truth with conviction. So, allow me to speak the truth here today.

“We are facing some very serious challenges as a country; these are problems of insecurity, challenges of greater accountability in governance, youth unemployment and the scourge of spiraling poverty.

“These problems are however, not the exclusive preserve of Nigeria, we live in a troubled world: The reality we used to know has altered in nearly every nation,” he said.

The presidential hopeful said that climate change had brought about food scarcity in some places.

He further said that population explosion had produced unusual pressure on resources and supplies.

“Poverty has become a challenge all over the world especially in the developing world: The COVID-19 crisis has placed unanticipated burdens on the budgets of nations and put pressure on available resources.

“Trans-border crises have erupted in unusual places and placed the internal security of many nations under pressure.

“We are part of the Sahel, an area of the world that is subject to frequent terrorist attacks. Let us look at our current challenges as part and consequences of these global trends,” he noted.

However, Amaechi admitted that Nigeria’s problems did not begin at the moment and would not be solved overnight.

“But they are not beyond the capacity of our people to solve: Fortunately, that process has already started with the current administration of President Muhammadu Buhari.

“There is an ancient proverb that, a society grows great when old men plant trees under whose shade they know they’ll never sit.”

“The current administration under the able leadership of President Muhammadu Buhari has planted many such trees in Nigeria’s future,” he emphasised.

The former Rivers governor commended President Buhari  for investing billions in infrastructure, human capital development and made reforms that would pay off over time in terms of socio-economic growth and stability.

“We have invested heavily in projects and initiatives that will secure a brighter, better future for Nigeria.

“I am proud to have been part of this success story, it has been an honour overseeing the Ministry of Transportation in reviving the moribund railways.

“And working tirelessly to create an integrated national transportation system that will positively impact our economy, trade, employment, business, and national cohesion,” he said.

Amaechi promised to bring to bear his years of experience in public service if given the opportunity to serve Nigerians as president.