In two years, Sanwo-Olu ups the beat in leadership

Two years of Sanwo-Olu has triggered an infrastructure revolution in a state that knows no sleep. Some folks have argued that some of the commissioned projects were initiated by Sanwo-Olu’s predecessors. So what? The very fact that he did not abandon those projects to start ‘his own’ projects speaks to the character of Sanwo-Olu 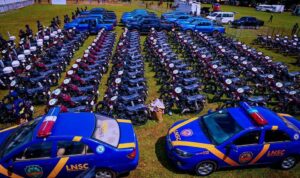 In typical Nigerian parlance, when someone tells you to ‘show your hand’, it simply means prove your mettle, show your competence; exhibit your capacity. It’s usually the message of the hirer to the foreman. Lagos governor, Babajide Sanwo-Olu, is showing his hand to his hirers: Lagosians.

In two years, after an initial bumpy start, Sanwo-Olu has navigated the ship of state through a treacherous turbulence which is what governance of a ruthlessly cosmopolitan state like Lagos is. Sanwo-Olu is showing his hand. In recent weeks, the governor has been up and about commissioning projects with both commercial and humanitarian impact on Lagosians.

If he was not commissioning a low-cost housing estate, he was commissioning blocks of classrooms, roads in Ikorodu and other parts of the state; health facilities to boost public healthcare; transport infrastructure to cater for the teeming population; the latest being the ultra-modern bus terminal in Yaba.

Ahead of the June 12 Democracy Day celebration, precisely on June 10, Sanwo-Olu raised the bar in security and anti-crime intelligence and surveillance. He donated 150 vehicles, four high-capacity troop carriers, 30 patrol cars, and two anti-riot water cannon vehicles to the police. Other equipment on the donation list include two Armoured Personnel Carriers (APCs), 200 security patrol bikes, 1,000 units of ballistic vests, 1,000 ballistic helmets, 1,000 handheld walkie-talkies, office furniture, and other security resources. Lagos has a history of doing big things in the anti-crime fight. But Sanwo-Olu’s latest intervention would rank among the biggest and the best.

Lagos is Nigeria’s commercial hub. It’s what New York is to America. The birthplace for big deals, private sector hotpot; a place where both the rich and the poor tango in traffic. Lagos is our commercial nirvana; a buzzing hub for merchandising and manufacturing. A mega city entrapped and pressured in its own cocoon but resilient enough to resist a burst. Lagos enchants. It attracts one and all. The flotsam and jetsam; the hoboes and the vagrants all mill around in interminable dalliance with their opulent oppressors. That’s Lagos. A mix of urbanity and rural rustiness just like many cities around the world. A state of such make-up always comes down with its own puff of crime and criminality. And Lagos has its fair share of crime. From small crooks robbing in traffic to neighbourhood urchins breaking into homes and certified armed robbers busting into banking halls in Gestapo style, the hoodoo of crime still infests Lagos.

But make no mistake about it, Lagos is still safe compared with the Mexican cities of Tijuana, Acapulco and Ciudad Victoria; or Venezuelan cities of Caracas and Ciudad Guayana or even Fortazela and Natal in Brazil. Again, crime in Lagos is child’s play compared with crime records from Johannesburg, Pretoria and Durban in South Africa where gun-bearing young goons could test their strength in broad daylight gun duel with rivals; where morphine and cocaine couriers could openly engage the police in gun battle. But we need not wait for Lagos to go the way of Durban or Fortazela. And this is why the Sanwo-Olu gesture deserves laudation. There had been reports lately of the return of the bad boys on Lagos roads. There had been reports of gradual but steady influx of some criminal elements masquerading as herders into Lagos after they had insidiously erected tents and established their rings of criminal domains in other parts of South-south and South-west. No responsible leader would stand and stare while his domain is encroached by crooks. The Sanwo-Olu security intervention is therefore an act of responsiveness to a dangerous stimulus; a stimulus that is consuming some states in the north and even in the south.

The object of leadership is “security and welfare of the people.” The one is a subset of the other hence they are in most cases treated as one objective. In the present national context, security paves the path for welfare. Nigeria is in the throes of acute insecurity in a dimension that beguiles the mind. Blood, human blood, flows on our highways, byways and communities. The forests, once a safe haven for farmers and poachers, are infested with threshing blades and booming blunderbuss of opportunistic marauders. The forests, Nigerian forests, are now abattoirs – slaughtering mills of human beings to harvest their parts for sale or as crude response to non-payment of ransom by abducted victims’ relations to their evil captors. And here’s why the Lagos State Police Command must return the Sanwo-Olu gesture with equal measure of positive result. Mr. Hakeem Odumosu, Lagos Commissioner of Police, should not have any excuse not to quieten the bad boys in Lagos. At day and at night, Mr. Odumosu should rally his troop to keep Lagos safe. The Governor has done his part, the police must do their bit. Much has been given, much should be expected.

Two years of Sanwo-Olu has triggered an infrastructure revolution in a state that knows no sleep. Some folks have argued that some of the commissioned projects were initiated by Sanwo-Olu’s predecessors. So what? The very fact that he did not abandon those projects to start ‘his own’ projects speaks to the character of Sanwo-Olu. He’s a man for development, for the people; not a man for politics. A leader who lusts and hankers after power and politics would easily abandon the projects started by his predecessors, but one who desires development for the people would sweat to complete the projects for as long as they are for the common good.

Nigeria, sadly, is the notorious poster-child for abandoned projects. As at 2011, a Presidential Committee headed by Ibrahim Bunu returned a troubling verdict on the state of abandoned projects in Nigeria. The Committee said a record 12,000 abandoned projects (Federal government and states) littered the nation, all worth N7.8 trillion (which by current valuation should be over N21 trillion). Some of these projects remain abandoned after governments had paid over N2 trillion to contractors. Who remembers the International Cancer Centre (ICC) in Abuja. On July, 18 2009, then First Lady, Turai Yar’Adua, hosted a fundraiser. Billions of naira came in from contractors, governors and sundry Aso Rock fawners. Mission was to build a state-of-the-art cancer centre that would cater for victims of the four common cancer ailments in the country: Breast, cervical, prostate, and throat cancer. A good 12 years after, the ICC lies in coma, itself needing care: Abandoned!

It is therefore a show of strength of character and abiding love for humanity, not lust for political brinkmanship, that Sanwo-Olu completed projects of his predecessors alongside ‘his own’ projects. It speaks to the governor’s public-spiritedness. And that is the spirit every Nigerian leader should imbibe. With such spirit, Nigeria would long have made the most of Ajaokuta Steel Company, now 42 years old, since inception in 1979. But it suffered from the bogey of abandoned projects, a syndrome that has tethered the nation to the stump of infrastructure deficiency. Sanwo-Olu sure deserves diadem, not the social media tactless tantrums to make light of the serious job he’s doing in Lagos.