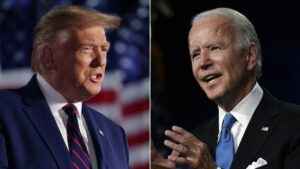 “I will not do what this president does and use the Justice Department as my vehicle to insist that something happened,” Biden told NBC News’ Lester Holt in an interview Tuesday.

“What I’m focused on is getting the American public back at a place where they have some certainty, some surety, some knowledge that they can make it,” the president-elect said.

Others in Biden’s orbit have made similar comments. “Joe Biden is not going to tell the Justice Department who to investigate or who not to investigate,” incoming White House chief of staff Ron Klain told ABC News’ “This Week” on Sunday.

The comments come as speculation around Trump’s post-presidency legal troubles remains, with some calling for the president to be prosecuted for alleged misbehavior in office.