It can now be revealed Maradona, 60, ate breakfast before telling nephew Johnny Esposito he didn’t feel well and was going to lie down again. 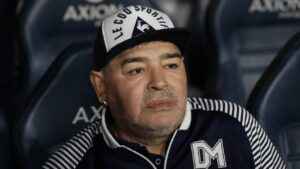 A nurse who was looking after Maradona, following his release from hospital after his brain scan op, phoned for an ambulance and several responded.

But it was already too late and the retired footballer was dead by the time help arrived. His body will now lie in state of three days as Argentina goes into 72 hours of national mourning over his death. The last hours of the former Napoli and Barcelona star’s shockingly short life were played out in Argentine media as an autopsy expected to show he had died from a massive heart attack.

One described how he had awoken in the morning looking pale and complaining of feeling cold.

He went back to bed after a quick breakfast where he is said to have pronounced his last words: ‘Me siento mal’ – English for ‘I don’t feel well.’

Emergency responders made an unsuccessful attempt to revive him after they arrived at the rented house in the gated community he had moved to after leaving hospital on November 11.

State prosecutors, who have launched a routine inquiry into Maradona’s death, said it had occurred around midday.

The preliminary autopsy has found Maradona died in his sleep after suffering heart failure which caused a pulmonary edema.

Medics are also said to have detected dilated cardiomyopathy, a medical condition in which the heart muscle becomes weakened and enlarged and cannot pump enough blood to the rest of the body.

Pulmonary edema, fluid accumulation in the lung’s tissue and air spaces, are caused by heart problems in most cases.

-The Sun of UK