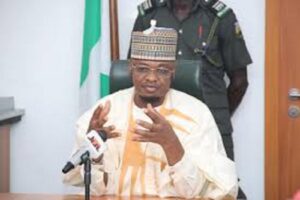 The Minister of Communications and Digital Economy, Prof. Isa Pantami, on Friday, recounted how he faced intimidation and threats for initiating the NIN-SIM integration policy, adding that no fewer than 44 petitions were written against him.

“When I came up with the policy, they wrote more than 44 petitions against me to drop it. Some of them to Mr President, some of them even court cases.

“Some people took the Federal Government to court in at least seven courts all over the country. When I met Mr President, he said resist and continue and I said I won’t fail you Sir.’’

He said the Federal Government is harnessing various Information Communication Technologies (ICT) initiatives towards improving security across the country.

Pantami stated this in Gombe while delivering a convocation lecture at the sixth to 35th combined convocation ceremony of the Federal College of Education (Technical).

The theme of the lecture is “Deployment Emerging Technologies to Enhance the Security of Tertiary Institutions in Nigeria.’’

He stated that the Federal Government, through the ministry of Communications and Digital Economy, is initiating several policies towards assisting security agencies and other relevant institutions in protecting Nigerians.

He said that part of that effort resulted to the National Identification Number (NIN) initiative to ensure that all Nigerians are properly profiled in accordance with global practice, towards addressing emerging security challenges.

“Without profiling, no country will be secured globally; it cannot be possible. Most of us when we travel to developed nations, we obtain their NIN but when we come to Nigeria, we don’t want to do it.

“It is because of the need to get citizens properly profiled to better protect our society and ensure development of the country that is why we have been pushing for NIN in Nigeria,’’ he said.

Pantami stated that his ministry would continue to implement the NIN policy to help protect citizens from emerging threats from cyber space, adding that identification number is a major requirement in developed countries.

He stated that the National Identity Management Commission (NIMC)’s database in 2020 which had 42 million people captured between 2007 and 2020 has been increased to more than 67 million today.

He added that there has also been an increase in the number of enrollment centres in the country from 1,600 to over 6,000 centres.

Pantami stated that the government is also improving cyber security, noting that cyber security key to protecting institutions of learning.

“There can hardly be a crime committed at a higher level without tracing its footprints online; having an effective cyber security team and centre in our society will go a long way in protecting our institutions.

He stated that there are 24 emergency communication centres which by 2022 would be increased to cover the entire country, adding that such centres would help link citizens to relevant security institutions for interventions.

“We are working on an application to be deployed in the centres that if you make a call, your exact location would be traced by security institution.

“Even if your phone is switched off, the system will be able to trace your location; we have reached an advanced stage,’’ he stated. (NAN)