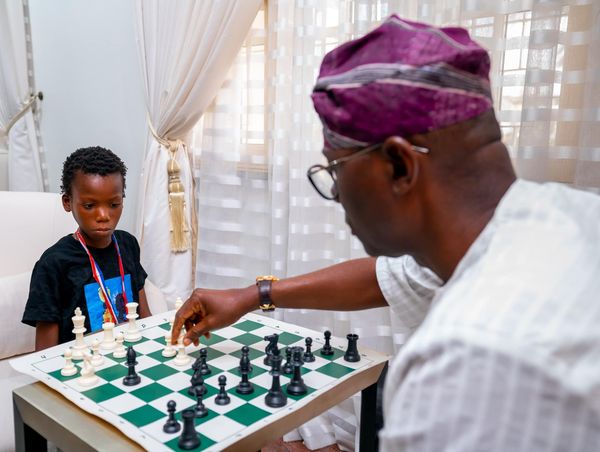 Sanwo-Olu has eyes and he sees. He sees the tears of the people. He would rather walk the distance and exchange pleasantries with the commoners than chase them out of his path with blazing sirens and convoy. Sanwo-Olu is not an absent leader. He’s a present leader. He dwells among his people, the people of Lagos.

If leadership is about connecting with people, Babajide Sanwo-Olu, governor of Lagos State is a master of the game. Deploying emotional intelligence and empathy, Sanwo-Olu has continued to define leadership not as lording it over the people but as serving the people, being available and accessible. Simply put, he has defined leadership as birthing hope in the people.

The Lagos governor has these past two years showed a knack. He turns ordinary folks to heroes and heroines. He makes the lowly hug the limelight. He has activated fame among the dreg of society. Poor, famished folks, through him, have found favour and fame. The hungry are fed not just with food but also with a future.

Leadership is organic. It regenerates itself, re-inventing new ways to solve new challenges. Sanwo-Olu rides the crest of this brand of leadership. He is leading a state that is a microcosm of the nation. Heterogeneous, multi-cultural and socially multi-stratified, Lagos throws up novel challenges requiring strategies not captured in textbooks or taught in school. And Sanwo-Olu has proven at every turn that he’s the fit man for this moment. He has ears and he hears. Sanwo-Olu listens and good listeners make great leaders. He hears the sighs and moans of the people.

Sanwo-Olu has eyes and he sees. He sees the tears of the people. He would rather walk the distance and exchange pleasantries with the commoners than chase them out of his path with blazing sirens and convoy. Sanwo-Olu is not an absent leader. He’s a present leader. He dwells among his people, the people of Lagos.

Just a few examples of what a listening and seeing leader he is.

Recall the little lad, Oreoluwa, of the Mummy Calm Down fame? In July, 2020, a video had gone viral of a little lad who was tearfully pleading with his mum to calm down and not spank him for an obvious misdemeanour. A terrified Oreoluwa deployed all the finesse of entreaties to escape the rod. But he ended up giving Nigerians a therapeutic phrase – Calm Down – in the midst of a nationwide tension. It was in height of Covid-19 lockdown and there was a pall of hunger, anger and insecurity enveloping the nation.

Of all the governors and leaders in Nigeria, it’s only Sanwo-Olu who picked the real essence of Oreoluwa’s plaintive plea of Calm Down and it formed the basis of the governor’s Sallah message to Lagosians.  It turned out the most referenced Sallah message from leaders nationwide. Sanwo-Olu maximised the moment because he’s a listening leader. The governor sought to host the little lad and he did. That’s a moment in time in the life of young Oreoluwa whose desire is to become a police officer someday. The governor’s emotional connection to the cry of Oreoluwa and how he turned it to a message of hope for Lagosians and indeed Nigerians earned him commendation from far and near.

One Mr. Michael Magi wrote in the governor’s Facebook wall: “Really shocked at this Governor. How can you create a moment to read our pulse, listen to our cries, become a Voltron from the blue? Never in the history of my beautiful Lagos has any governor acted like this. So all that slogan on your campaign billboards are true? When Lagos sneezes, Sanwo-Olu hears. You have been proactive over major issues which naturally many will not commend you for, but that you listen… even to our gossip… I respect you even more. What people want is a leader that can listen more and act fast. You are simply AMAZING.”

Remember the story of 10-year autistic child, Ferdinand Maumo? Well, he’s the guy who caught the fame bug playing chess. The governor heard about him and sought not only to meet him but also engage him in a chess game. And he did. Re-living the moment, Governor Sanwo-Olu wrote: “On Children’s Day, I accepted a challenge from 10 years old Chess prodigy, Ferdinand Maumo. Today, we decided to sit down and duel it out. Even if I do say so myself, I’m a pretty decent Chess player but after an intense encounter, Ferdinand proved a hard nut to crack and we reached a stalemate.

“Ferdinand’s story is not just about his dexterity as a chess master but that of the resilience of the human spirit to thrive against all odds. Ferdinand is a young autistic boy who has found the strength to rise above his challenges.

“As a government, we are working very hard to support every child with special needs and we are committed to ensuring that no segment of our society is left behind. I am inspired by Ferdinand. I strongly believe his mastery of the game of chess will continue to be a catalyst for greater success ahead of him.”

Lagosians have not forgotten the story of Mary Daniel, the amputee hawker who trended on social media and Lagos State had to make a noteworthy intervention. The list is long of how Sanwo-Olu has deployed emotional intelligence to lift people from obscurity to fame; hopelessness to hope. This is the kind of leadership Nigerians yearns for at every level. Leadership that listens and sees, a doing leadership: one that sees all from the prism of humanity, not from ethnic binoculars.

Leadership is never about self; it’s about others, about service to the people. It’s about giving, not receiving. Sanwo-Olu epitomises these traits and Lagos is lucky to have him in the saddle at these times.