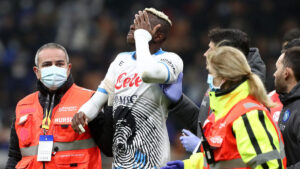 Napoli forward  and Super Eagles hitman, Victor Osimhen’s eye came out of its socket and he had 18 screws inserted in his cheekbone to address the horrendous facial injury he suffered last week in the 3-2 defeat against Inter Milan.

Osimhen sustained fractures to his cheekbone and eye socket after colliding with Inter defender Milan Skriniar and faces a three-month spell on the sideline, reports The Mailonline.

Such was the force of the impact, Osimhen’s eye came out of its socket and his face looked as if it had ‘ended up under a press’, according to Gianpaolo Tartaro, the surgeon who treated the 22-year-old on Tuesday.

‘He had a series of fractures, it was as if his head had ended up under a press,’ Tartaro told Corriere dello Sport earlier this week.

‘The eye came out of its socket. It is not simple at all, in fact it is very delicate due to the crushing of the socket, due to the curving of the malar bone [which is] practically destroyed.

‘The various fractures, not only the cheekbone, obviously brought complications and six plates and 18 screws had to be inserted,’ Mailonline  quotes the surgeon.

Tartaro explained the extent of the injury made the surgery far from straightforward, adding the Nigerian will in all likelihood have to wear a special face covering once he returns to action.

‘We have to now look at a special mask for his case. It is not something banal, there is a nerve there, it is all very difficult. We will see how his situation evolves.’

Osimhen will miss the African Cup of Nations in January and may well have to undergo surgery again, Tartaro warned.

‘Victor has to be very careful because if there is a problem he must return to the operating room,’ he said.

Osimhen has scored nine goals in 14 appearances for Napoli this season, and his injury is a potentially devastating blow for Luciano Spalletti’s men, who are top of Serie A ahead of AC Milan on goal difference after 13 games.

Napoli’s 3-2 loss against Inter last week was their first in Serie A this season and saw the defending champions cut their gap to the duo at the top to four points.